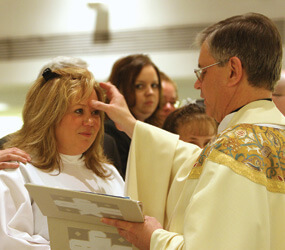 Sitting just mere feet away was the loving Pentecostal couple who adopted her 42 years ago – Hazel and Vernon Russell. A pew behind in the Glyndon church was the woman, Judy Numbers, who gave birth to Lisa on a March day in 1967.

In the last six years, Ms. Numbers and Ms. Russell reconnected and developed a mother-daughter relationship. In the weeks leading to this night, Ms. Numbers had given her daughter a prayer book she kept as a child growing up in the Catholic faith.

“Lisa,” Monsignor Aiken said as he poured holy water over Ms. Russell’s head, “I baptize you in the name of the Father, the Son and the Holy Spirit.”

The Easter Vigil brought the last step into Catholicism for Ms. Russell, Gene Luong, Sonia Bui and Gwen Walton-White, who were chronicled in The Catholic Review over the last few months.

Twenty-six miles to the south of Sacred Heart, at St. John the Evangelist in Columbia, Mr. Luong stepped into the church’s font on Holy Saturday. Sonia Bui watched as her once agnostic husband was baptized by the church’s pastor, Monsignor Richard H. Tillman.

“It was one of those moments I will never forget,” Mr. Luong said. “He poured three pitchers of holy water on my head. I’ve never felt so much water cascading down on me.”

Ms. Bui could not contain her pride.

“I was so proud,” she said. “Tears started coming to my eyes.”

Less than 12 hours after the momentous event, on Easter Sunday morning, Mr. Luong and Ms. Bui looked at one another knowingly.

“It was like we woke to a new day and a new beginning,” Ms. Bui said. “We’re almost different people.”

Mrs. Walton-White spent her entire life in Christian churches, but never felt the intimacy that she saw in Catholicism.

The aspiring convert from Baptist and African Methodist Episcopal traditions finally came to an understanding during Holy Week at St. John the Evangelist. She participated in the foot washing of Holy Thursday and trembled at the vivid re-telling of Jesus’ tortuous journey to crucifixion on Good Friday.

“I’ve never felt so close to God,” she said. “I couldn’t believe how heartbreaking it was. You could feel what he was feeling.”

The next night, she was joined by Mr. Luong and Ms. Bui at St. John the Evangelist, along with other soon-to-be Catholics for Easter Vigil. After months of studying the Catholic faith in the Rite of Christian Initiation for Adults courses, the end had arrived.

When Monsignor Tillman traced the sign of the cross on the forehead of Mrs. Walton-White and confirmed the Holy Spirit upon her with chrism oil, she was one with God.

“I just felt,” Mrs. Walton-White said with a pause, “lifted.”

Mr. Luong and Ms. Bui stood side-by-side in front of the altar for confirmation. Even though she was raised Catholic, she had never received the sacrament. She found nourishment in studying with her husband.

“I was very touched by the support we received from the parish,” Ms. Bui said on Easter Sunday. “I’ve never felt so close to my faith as I did last night.”

The rites of baptism and confirmation were almost a blur for Ms. Russell. When Monsignor Aiken stood before her holding the body of Christ, she felt “grounded.”

She awoke Easter morning and drove to Sacred Heart for Mass and renewed her baptismal promises with parishioners.

“I wasn’t different anymore,” she said. “I was officially Catholic.”