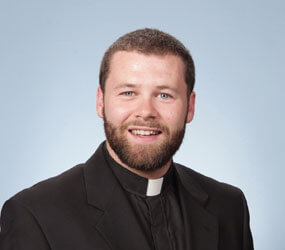 One year after the Archdiocese of Baltimore hit a 20-year high in the number of men accepted as priesthood candidates, the archdiocese has accepted eight newcomers for the 2009-10 academic year.

A total of 34 men are now preparing to become priests for the Baltimore archdiocese – down by four from last year, but higher than previous years.

“We really do look for quality rather than quantity,” said Father Gerard Francik, archdiocesan vocation director, “but I have to say that I’m very happy with the numbers.”

Father Francik credited adoration of the Blessed Sacrament as a major reason for the increase in numbers. Parishes that offer adoration are seeing more men and women answer the call to religious vocations than parishes that do not.

“Parishes that have active youth groups and places where the pastor has been there for awhile are also producing religious vocations,” he said.

This year’s candidates range in age from 22-33 and the average class age is younger than last year’s, Father Francik said. Some of the candidates are still in college, while others come from a wide range of careers including teaching, military service, forestry and bartending.

Two are international candidates from Colombia and another will study to serve as a priest for Baltimore and as a military chaplain.

Josh Laws, a 24-year-old parishioner of St. Stephen in Bradshaw, said he has been thinking about becoming a priest since kindergarten and finally took the leap this year. He was accepted into the formation program and will begin his first year at St. Mary’s Seminary and University in Roland Park this fall.

“When I told my parents, they both said, ‘It’s about time,” Laws said with a laugh. “They’ve been very supportive.”

The former altar boy grew up in a family that prayed together every night. His father is a deacon at St. Stephen. The seminarian said he was inspired by the priestly example of the Jesuits who taught him at Loyola Blakefield in Towson and Loyola College in Maryland, where he earned a degree in philosophy and theology.

“They had a huge influence on me,” said Laws, a former religion teacher at The John Carroll School in Bel Air. “The Jesuits were extremely committed guys, but joyful in their faith. They were the first ones to challenge me to think about faith as part of who I am.”

Laws recently completed a six-week summer pastoral assignment at St. Gregory the Great in Baltimore and witnessed parish life on a day-to-day basis.

Stephen Cotter, a 33-year-old former soldier who served in Iraq, said he applied for the priesthood in the Baltimore archdiocese because of Archbishop Edwin F. O’Brien’s support for military chaplains. Before coming to Baltimore, the archbishop headed the U.S. Archdiocese for the Military Services.

While in Iraq, Cotter noticed that there were not enough priests to minister to soldiers on a regular basis. A major reason he wants to become a clergyman is to help meet that need, he said.

“It’s the opportunity to bring the sacraments to the people,” said the Oklahoma native, who is being sponsored by St. Peter in Westernport and who will attend St. Mary’s Seminary.

Like Laws, Cotter said his family was supportive of his decision. His younger sister is a Dominican. Since January, Cotter has lived at the Cardinal Keeler House of Discernment in Baltimore, a residence for men who are considering the religious life.

After ordination, Cotter will serve several years in archdiocesan parishes before working as a military chaplain.

Seminarians typically undergo seven years of study, including a pastoral year spent in a parish.