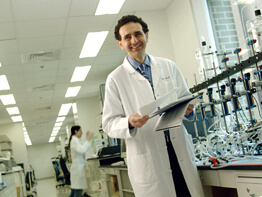 WASHINGTON (CNS) — The recent announcement by scientists at Wake Forest and Harvard universities that the amniotic fluid surrounding a child in the womb can be the source of medically useful stem cells is just the latest in a series of studies showing the research value of the byproducts of live birth, according to the deputy director of the U.S. bishops’ Secretariat for Pro-Life Activities.

Richard M. Doerflinger told Catholic News Service Jan. 8 that various studies have shown that the placenta, cord blood, the umbilical cord itself and other byproducts of birth “may all contain very versatile stem cells, with many of the advantages of embryonic stem cells without the practical disadvantages or moral problems.”

“With 4 million live births every year in our country alone, an ample supply of these cells lies readily at hand,” he added.

The study was reported Jan. 7 in the online edition of the journal Nature Biotechnology and included research by scientists at the Wake Forest Institute for Regenerative Medicine in Winston-Salem, N.C., and Children’s Hospital and Harvard Medical School in Boston.

The U.S. House of Representatives was expected to vote Jan. 11 on expanded federal funding of stem-cell research involving the destruction of human embryos. President George W. Bush vetoed a similar measure in July, and the 109th Congress failed to override the veto.

In the journal article, Dr. Anthony Atala of the Wake Forest institute said he and his colleagues had used stem cells derived from amniotic fluid to create muscle, bone, fat, blood, nerve and liver cells in the laboratory.

“It has been known for decades that both the placenta and amniotic fluid contain multiple progenitor cell types from the developing embryo, including fat, bone and muscle,” said Dr. Atala in a statement. “We asked the question, ‘Is there a possibility that within this cell population we can capture true stem cells?’ The answer is yes.”

Mr. Doerflinger said it is “especially ironic” that the frozen embryos that some scientists want to destroy for stem cells “may produce more beneficial stem cells if allowed to survive and be born.”

“New life, not premature death, may show us the way to a brighter medical future,” he added.

Mr. Doerflinger also disputed the results of a recent public opinion poll commissioned by the Civil Society Institute in which 68 percent of all the respondents — and 69 percent of the respondents who described themselves as Catholics — said they wanted Congress to act quickly to expand federal funding of embryonic stem-cell research.

The margin of error for the survey was plus or minus 3 percentage points.

“Studies like this are seriously flawed because they ask about support for ‘stem-cell research’ without acknowledging other sources of beneficial stem cells or making it clear that obtaining stem cells requires destroying the human embryo,” Mr. Doerflinger said.

“When told the facts, most Americans (and most Catholics) want their tax dollars used only for avenues that do not require destroying embryonic life, to determine whether we even need to consider taking the morally controversial course,” he added. “The great majority of Americans favor medical progress, but would greatly prefer that it be pursued without destroying life at any stage.”