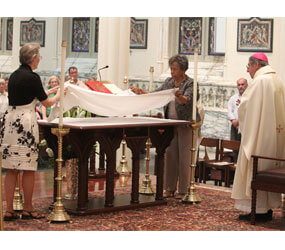 Three days before his church’s new altar, ambo and baptismal font were to be dedicated June 5, Monsignor Richard J. Bozzelli marveled at the new additions. Inside the spectacular Florentine-style church in Baltimore City, they appeared humble, rather than gaudy.

“I see it as energy of looking to the future, but a respect for the past,” Monsignor Bozzelli said.

He thought about the man who designed the liturgical furnishings – the late Michael V. Murphy, who died in February of a heart attack.

“The absolute brilliance of Mike Murphy was his ability to take a building, get inside the building, understand the building and then to create within it,” Monsignor Bozzelli said. “It’s heartbreaking that he never saw this.”

As he approached the project, Murphy included touches that match other features in the church, like arches in each piece.

“Even though these are new, they fit so nicely with the church,” pastoral associate Betsy Lafferty said.

John H. Franz fabricated the wooden furnishings, which were blessed at the June 5 Mass Auxiliary Bishop Denis J. Madden offered for Murphy. Later, Bishop Madden led the prayer of dedication and anointing for the altar with chrism oil.

The Mass was celebrated on the Corpus Christi feast day, the Solemnity of the Body and Blood of Christ.

“To finish this out on the feast day of Corpus Christi, by dedicating the altar, blessing the other furnishings is just (wonderful),” Monsignor Bozzelli said.

Monsignor Bozzelli celebrated the 16th anniversary of his ordination June 4 and his 50th birthday June 6.

The altar was a gift from his parents, Andrew and Dolores Bozzelli. His father is deceased. The ambo is a gift from Dr. Patricia Fosarelli in honor of her parents, while the baptismal font is a gift from the estate of Joann Abromaitis.

A hand-crafted Book of Thanksgiving will be displayed and have the names of people who have given to the church during the last decade. The church raised $1 million for various additions and renovations, starting in 2003 with the four-phase Faith BUILDING Community Campaign. The participation rate for parishioners, Monsignor Bozzelli said, was exceedingly high.

The parish’s old altar and ambo will be given to the new Holy Angels School, which will serve kindergarten through eighth grade starting this fall on the campus of Seton Keough High School. Corpus Christi has had a supportive relationship with Father Charles Hall School, which is closing and sending students to Holy Angels.

Monsignor Bozzelli said parishioners had an active role in planning the new furnishings and are excited about their dedication.

“It’s consistent with the church,” he said of the additions. “It fits.”