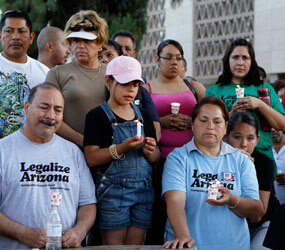 WASHINGTON – When residents of Fremont, Neb., voted June 21 to bar undocumented immigrants from renting housing or getting jobs in their city, they stepped onto a path that other U.S. towns have already blazed, with legal and political results that remain unclear years later.

One thing that is clear, however, is that similar ordinances have been costly, both financially and to relationships within the communities.

Fremont’s voter initiative, approved by a vote of 3,900 to 2,900, will require people to get a permit from the city to rent property. The permit application requires proof of legal U.S. residency for anyone who says they are not a U.S. citizen.

Those unable to prove their legal status would lose their occupancy permits and would be subject to a daily fine of $100 if they don’t vacate the property, according to an analysis by Jim Cunningham, director of the Nebraska Catholic Conference, published in the Catholic Voice, newspaper of the Omaha Archdiocese.

The law also will require employers in the city to verify job applicants’ immigration status. Businesses that fail to comply would be “tried at a public hearing before the City Council,” the law says.

Lawsuits challenging the ordinance are already being prepared and the city has opened a legal defense fund to cover expected costs estimated at anywhere from $270,000 to more than $5 million, reported the local newspaper, the Fremont Tribune.

Various courts have overturned or blocked most of those laws. Others were withdrawn as legal defense bills mounted – into the millions of dollars in some cases – and as ordinances elsewhere were struck down as usurping federal immigration law.

Appeals of some rulings are still pending. For instance, the 3rd U.S. Circuit Court of Appeals heard oral arguments over Hazleton’s law in October 2008 and has yet to issue its ruling. None of the cities has been able to enforce the laws.

But that hasn’t precluded consequences in the communities.

Monsignor Joseph Kelly is director of Catholic Social Services in the Diocese of Scranton, Pa., which includes Hazleton. He also is episcopal vicar for Hispanic ministry for the diocese and administrator of Holy Rosary Church in Wilkes Barre, about 20 miles up the road from Hazleton.

When Hazleton’s City Council passed its immigration ordinance in 2006, many immigrants who lived there left the immediate area, with a lot of them ending up in Monsignor Kelly’s parish, he told Catholic News Service.

Hazleton Mayor Lou Barletta has estimated that as many as half the city’s 10,000 Hispanics moved away. But according to Monsignor Kelly, four years later they’ve largely been replaced in the community by new immigrants from the Dominican Republic.

In many respects, Hazleton is similar to Fremont, noted Monsignor Kelly, who used to work in Nebraska at Boys Town, not far from Fremont. Both towns have about 25,000 people, are somewhat isolated – Fremont is about 35 miles from Omaha – and have low-skill industries that in the past couple of decades have attracted Hispanic immigrants who bolstered the previously shrinking populations.

But the new residents who were hired at direct-mail operations in Pennsylvania and meat-packing plants in Nebraska, who opened businesses and enrolled their children in schools, also came speaking Spanish and with cultural customs unfamiliar in their new communities. The changes were uncomfortable for many of the longtime residents.

Mary Ellen Blackwell, director of parish social ministry for Catholic Charities of the Diocese of Trenton, N.J., told CNS that when Riverside Township passed an immigration law in 2006, hostility toward the largely Brazilian immigrants was open and vocal.

She described a prayer vigil in August 2006, held shortly after the law passed, where the law’s backers tried to drown out the prayers with shouts of “go home” and hovered around the outdoor event, waving Confederate flags and taunting participants as they walked from the town hall to the Catholic Church.

“It was like Jesus walking to Calvary,” she said. “There was this amazing sense of how the crowd mentality works.”

Such attitudes are what Fremont activist Karen Ostrom attributes with causing what she described as a lack of involvement by the town’s religious leaders in the buildup to the immigration vote.

Ostrom, a Creighton University law graduate whose husband is pastor of a Lutheran church in Fremont, told CNS she started two years ago trying to bring together the town’s Hispanic immigrants and its longtime residents in small church-led activities to try to head off burgeoning tensions. Efforts to have churches host small dinner gatherings, for instance with six Latinos and six white members of a parish, led to just one such dinner, she said.

She said more than one pastor told her he was unwilling to take a public stand against the initiative when longtime members of his church were promoting it and it was those members who represented his church’s history and financial backbone.

Father Joseph Taphorn, chancellor of the Omaha Archdiocese, told CNS the temporary lack of a pastor at St. Patrick’s Parish in Fremont this past spring was a significant factor in the low profile the Catholic Church had in community debate about the ordinance. He noted that the archdiocese and the state Catholic conference have actively opposed many state legislative efforts that would have negatively affected immigrants and has worked to protect a law permitting students who came to the country illegally as children to obtain in-state tuition at Nebraska colleges.

Monsignor Kelly offered advice to the church in Fremont as the town advances on the path Hazleton took a few years ago.

“They need to be sure they are ministering to all the community, including the immigrants,” he said. Inviting people to share in each others’ cultural celebrations, making sure the immigrants are a part of a longtime parish festival, for instance and that long-term residents are invited to the immigrants’ events, are a start, he said.

“The church needs to try to bring people together,” he said.