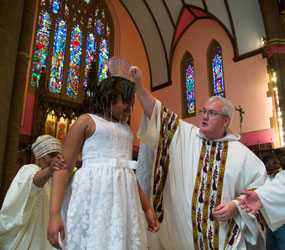 Referencing the words of Pope Benedict XVI and St. Augustine, Archbishop Edwin F. O’Brien welcomed eight men and women into full communion with the Catholic Church April 23, during the Easter Vigil at the Cathedral of Mary Our Queen in Homeland.

Throughout the Archdiocese of Baltimore, nearly 800 new Catholics participated in the celebration of initiation.

Before he baptized Jonathan Goldman and received seven others into full communion, Archbishop O’Brien broke from his prepared homily and paraphrased St. Augustine.

“He said that if there were one celebration a year he could witness, it would be this one,” Archbishop O’Brien said. “I sense that tonight.”

The archbishop also quoted the Holy Father, in explaining the resurrection of Jesus Christ.

“Pope Benedict,” the archbishop said, “borrows words from the theory of evolution attempting to impress upon us the mystery and wonder of this radical intervention of the divine into our history.

“The resurrection ‘is the greatest mutation, absolutely the most crucial leap into a totally new dimension that there has ever been in the long history of life and its development: a leap into a completely new order which does concern us and concerns the whole of history.’

The Easter Vigil began with the archbishop lighting and blessing the paschal candle, which was carried into the cathedral by Deacon Ray T. Moreau. The responsorial psalm was composed by Robert Twynham, the longtime music director of the cathedral, who died in March at age 80.

According to the archdiocese, 228 catechumens (the unbaptized) and 565 candidates (those who have been baptized in the Christian faith, but have not received the sacraments of Communion and/or confirmation) participated in the celebration of initiation, when catechumens receive the sacraments of baptism, confirmation and Eucharist, and candidates are received into the full communion of the Catholic Church.

At St. Bernardine in West Baltimore, Monsignor Edward M. Miller, pastor, said that the 9 p.m. Easter Vigil began with the lighting of the paschal candle outside, and a procession down Mount Holly Street and into the church, where two adults were baptized and two others were received into the church.

During an Easter morning liturgy at St. Wenceslaus in East Baltimore, the sanctuary was adorned with Easter lilies and bright yellow and pink flowers. A statue of a victorious risen Christ stood in front of the altar.

The congregation was made up of a diverse population, including black and white families. A Czech Easter hymn was sung during the celebration, a nod to the parish’s 19th century founding as a Bohemian faith community.

In his homily, Father Peter Lyons said being a Christian is “not just about accepting Jesus as my personal savior.”

“Jesus didn’t commission us to be lone rangers,” said the pastor, a Third Order Regular Franciscan. “He called people to be part of a community. We need one another to support each other in good times and bad times.”

Before parishioners stood to renew their baptismal promises, the priest said the vows would be made “in communion with all our brothers and sisters.”

“We look to one another to share our faith,” he said. “Sometimes we fall. Sometimes we stumble, but all together we move forward.”