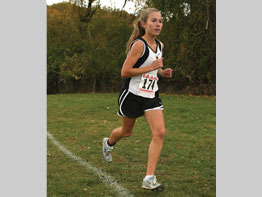 Who needs a star or two when you can deliver unparalleled pack running?

Notre Dame Preparatory School, Towson, continues to make the point that cross country is a team sport, as the Blazers stuck together, figuratively and literally, to repeat at the Interscholastic Athletic Association of Maryland championships Oct. 29.

Coach Tom Klein didn’t have a girl in the top five at Oregon Ridge Park, but five of the next seven finishers were from NDP, as just 33 seconds separated senior Liz Schiavone in sixth and junior Nicole Troiani in 12th. In between came junior Kate Dunseith (eighth), freshman Laura Slaughter (10th) and senior Julianna Rubino (11th).

How deep are the Blazers?

When NDP goes to the state Private Schools championships Nov. 8, Klein’s lineup will elevate two girls who were relegated to the open race at the MIAAs.

That is the kind of situation a coach gladly gets to reconcile when he has a roster that lists 70 names.

“We haven’t had a front-runner in a long time, and that depth is the key to our success,” Klein said. “Obviously, with 70 girls, there’s a lot of talent to choose from.”

The Blazers repeated as A Conference champions and won for the third time in Klein’s six years as coach. How does the chair of the school’s Social Studies department foster such participation in a sport few experience before high school?

“We approach running as a life skill, it’s more than competition” Klein said. “It’s about the purity of the sport, all the benefits that running can give a person. The kids love each other, and support each other, and that doesn’t stop once they graduate.”

Proving that point, Margaret Davies, an NDP senior last year who’s now a rower at Bucknell University, made the haul down from Lewisburg, Pa., to cheer on her former teammates.

There was no surprise at the front of the pack, as Elizabeth Tauber, a sophomore at Bel Air’s John Carroll School, finished the 5,000 meters in 19 minutes, 26 seconds. She won by 22 seconds, with teammate Taylor Battaglia taking fourth.

Patriot coach Rob Torres has known about Elizabeth for a long time. He entered Archbishop Curley High the same year the Friars lost Steve Tauber, Elizabeth’s dad, who was a first-team All-Metro in cross country in 1981.

John Carroll produced the A Conference champion a third straight year, as Erika Stasakova won in 2006 and ‘07. She’s now a freshman at Lafayette College, and one of the Leopards’ top runners.

NDP beat John Carroll in the team standings, 47-62. The Blazers went 7-0 in their 7-0 in their IAAM dual meet schedule, and suffered their only loss at the Mercersburg (Pa.) Invitational, by six points to National Cathedral School of Washington, D.C.

The Institute of Notre Dame finished second in the IAAM B Conference chase. Colleen Randolph of St. Mary’s in Annapolis took second in 20:32, a time bettered only by four A Conference runners.