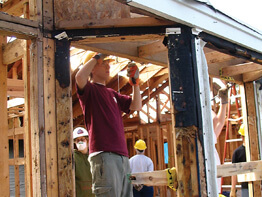 As Patrick Nolan volunteered to help victims of Hurricane Katrina rebuild, Mississippi resident Karen Parker said something to the teenager that he will remember forever.

“You can get bitter or get better,” she told the Church of the Nativity, Timonium, parishioner.

After Hurricane Katrina the parishioners of the Church of the Nativity took up a spontaneous collection and in one weekend raised $2,500. Not more than a year later, 19 parishioners set off for Mississippi to help those that had lost everything, rebuild and start over.

The volunteers chose to spend the week of Dec. 26 through Dec. 31 at St. Ann’s parish in Lizana, Miss. to dedicate their time, talent and care to the people in and around the parish.

“We wanted to fulfill what Christ said, to go out into the world,” said Jim Nolan, one of the leaders of the group.

The parish hall at St. Ann became the home of Project Hope and Compassion, which works with Christians, churches and supporters of many denominations throughout the United States. It was there that the volunteers were given shelter and food while working with volunteers of Persevere Disaster Relief, an organization started by a Boston College graduate who came to the Gulf Coast after the hurricane and never went back.

Bob Barczak, his two sons Bob and Joey and his wife Margaret, were inspired to volunteer because their oldest son had traveled to the region shortly after the disaster happened to do service work.

“We wanted to go down as a family, to try to make a difference in the lives of the people in Mississippi,” said Mr. Barczak. “We thought we could do some good.”

The large group was split into two smaller groups. One group of 12 people was assigned to demolish a house, by hand, near the bayou in Pass Christian because the owner could not afford the demolition of the condemned structure. The other group of seven volunteers was assigned to help complete the dry walling of a house whose owners had lost their business and home in Long Beach.

Steve Seipp said when he arrived in Mississippi and began working with the families living in the region, he noticed the people were tired but they were resilient when they had volunteers to help them.

“They were the nicest, warmest, friendliest people,” said Mr. Seipp. “You could not leave Mississippi without faith.”

Frank Toohey said he made his decision to go on this journey of hope after hearing Father Michael White tell the congregation that they should become more active besides just coming to Mass.

“I wanted to make sure that what I did was going to help people and this seemed like the perfect opportunity,” said Mr. Toohey. “We were all amazed at the devastation that is all around even after a year and a half. Volunteers will still be needed for another eight years.”

The group was so amazed by the strength and faith of the people devastated by the hurricane that they came back wanting to do more and go down again.

“We worked really hard and got a lot done. It surprised me how much you really can do,” said Janet Betten. “I came back feeling I have to go back to continue the work.”

Jim Righter said the people who volunteered, like Karen Parker, a parishioner of St. Ann who prepared many of the group’s dinners, were truly heroes to him.

“I’m very proud of the group that went down,” said Mr. Righter, the comedian and magician of the group. “We went down as strangers and came back as friends.”

The group is now planning to donate more money and another trip to Mississippi. They have also received a wish list of items needed from the Project Hope and Compassion. The young people of the Church of Nativity have raised a total of $10,000 to assist the group in their future endeavors.

“The most important thing we came away with is that our presence gave the people we worked with hope. It’s the people who need the most ‘rebuilding spiritually, physically and mentally,” said Fernando Tosti. “We felt God’s presence all around us and witnessed his love in so many ways.”