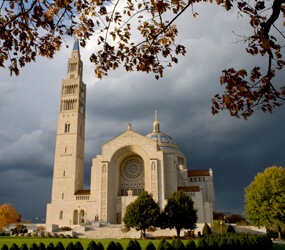 WASHINGTON – The Basilica of the National Shrine of the Immaculate Conception in Washington – the largest Catholic church in North America and one of the 10 largest churches in the world – is a familiar place to U.S. Catholics who regard the immense structure as their own.

The basilica, which marks the 50th anniversary of its dedication Nov. 20, is not a parish or a cathedral. Instead, it was designated by the U.S. bishops as a national place of prayer and pilgrimage, something the basilica’s 1 million annual visitors know well.

The book “America’s Church,” published by Our Sunday Visitor in 2000, describes the basilica as having “no parish community as its own; but rather counts every American Catholic among its members. No single bishop claims it as his cathedral; rather it is the church of all the nation’s bishops. … In every way, the national shrine is America’s Catholic church.”

And as a church for all Catholics, its doors are always open – seven days a week, 365 days a year. Every day, for five hours, priests administer the sacrament of reconciliation and celebrate at least six Masses. Weddings and baptisms – sacraments that are to be witnessed by a worshipping parish community – do not take place there.

On any given weekday, the basilica is often relatively quiet – aglow with flames of votive candles and often with the lingering scent of incense in the air. Groups go on tours and individuals pray in chapels tucked in nooks of the huge stone, brick and concrete church.

On weekends, holy days and special celebrations or dedications, the basilica is often filled to capacity and then some and the quiet calm is replaced with music and overflowing crowds, sometimes in native dress and holding aloft flags.

During the annual National Prayer Vigil for Life each January, hundreds of pilgrims from youth groups around the country spend the night on the floor on the basilica’s lower level.

During the spring and fall, dozens of diocesan groups make pilgrimages to the basilica and Monsignor Walter Rossi, the basilica’s rector, makes it a point to personally greet them. “This is your parish away from home,” he tells them. “You built it. You support it. We’re here for you.”

He said the basilica is often described as the nation’s parish because Catholics from across the country contributed to building it as a monument to Mary. He still receives notes from people who remember how their schools and parishes sent in donations – including collections of pennies – to help raise funds for this huge undertaking.

“Fifty years later it still has a national impact,” he told Catholic News Service Nov. 4, noting that many people who contribute say they have never even been to the basilica but they believe in the work it does.

The names of the founding contributors, and those they wanted remembered, are not just tucked away in yellowed record books, but etched in the walls and marble pillars on the basilica’s lower level.

Geraldine Rohling, the basilica’s archivist, said the pillars, and the names upon them, literally and figuratively support the church.

“These are the sentinels of our faith – the generation that came before us,” Rohling told CNS. She also described the chiseled names as a “roll call of the American church,” noting that they do not just include church leaders but members of Congress, Civil War veterans, saints and even George Herman “Babe” Ruth – baseball’s famous home-run hitter.

Rohling noted that early contributions to the shrine had been a significant sacrifice, especially during the time of the Great Depression.

Initial work on the shrine, named a basilica in 1990, began in the early 1900s. Although the cornerstone was laid in 1920, the Great Depression and World War II delayed completion of the upper church until 1959.

Since that time the shrine has always remained a work in progress with the continual additions of stained-glass windows, mosaics, statues, dome work and chapels. One dome in the interior of the upper church still remains unadorned.

More than 70 chapels and oratories – which are similar to chapels but do not have altars – are located throughout the shrine. Periodically new ones are dedicated by various ethnic groups and religious communities. These chapels relate to the shrines of the regions they represent such as Our Mother of Africa, Our Lady of Czestochowa and Our Lady of Guadalupe, to name just a few.

Rohling said the variety of chapels reflects the scriptural passage from the Gospel of John: “In my father’s house there are many rooms.”

She also said they demonstrate the diversity of the universal church.

Monsignor Rossi said the ethnic chapels give immigrants “a sense of coming home” and provide them with a tangible expression of faith.

In 1976, then-Cardinal Karol Wojtyla visited the shrine’s Polish chapel to Our Lady of Czestochowa and he paid a repeat visit to the chapel three years later as pope. When Pope Benedict XVI visited the basilica in 2008 he prayed at the Oratory of Our Lady of Altotting, the patroness of Bavaria, in his German homeland.

In his 1979 visit, Pope John Paul II said the shrine speaks “with the voice of all the sons and daughters of America, who have come here from the various countries” and possess the “the same love for the mother of God that was characteristic of their ancestors and of themselves in their native lands.”

“These people, speaking different languages, coming from different backgrounds of history and traditions in their own countries,” he said, “came together around the heart of a mother they all had in common.”