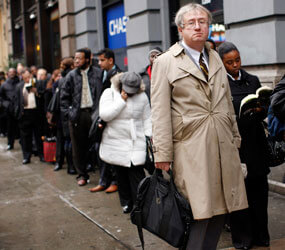 WASHINGTON – Times, as they say, are tough all over. And the economic troubles that have beset the United States, and much of the rest of the world, as a persistent recession reached its second anniversary also have touched the church.

A $787 billion federal stimulus package has probably created many jobs and saved many others, but the effort to quantify exactly how many jobs has been the subject of partisan wrangling.

The national debt, which reached $12 trillion close to the end of 2009, has given lawmakers pause on whether they should pursue a new stimulus package or figure out how to pay for a host of other initiatives, including climate-change measures to reduce pollution, health care reform and even a troop buildup in Afghanistan.

Dioceses and Catholic organizations have not been immune from the dilemma of how to pay the bills at a time of increased need and decreased assets.

“The requests are up, generally, and we’re just finding that charities are having a much tougher time this year than they have in the past, and we’re even seeing some groups closing, which we haven’t seen before. It’s sad,” said Frank Butler, executive director of Foundations and Donors Interested in Catholic Activities, an umbrella group of about 40 Catholic philanthropic organizations.

The latest victim was the National Pastoral Life Center, which was forced by a gradual decline in funding to close its doors at the end of November.

The U.S. Conference of Catholic Bishops, despite having approved a 2009 budget in November 2008, found that economic conditions had deteriorated so rapidly that a month later it instituted a budget and wage freeze for 2009. In November 2009, the bishops OK’d a 2010 budget with an increase of 0.2 percent – and allowing for the possibility of a 1 percent raise for most of its employees.

Some individual dioceses have had a particularly rough time.

The Archdiocese of Detroit, saying it was losing $42,000 a day and was on track to exhaust its cash reserves in 2011, slashed about one-third of its paid staff and imposed several other austerity measures. Michigan’s unemployment rate had climbed to 15 percent, while the unemployment rate in Detroit, which had been battered by the woes of the auto industry, was at 25 percent.

One sign of the weak U.S. economy was the reduced number of immigrants coming to the United States. Some estimates placed the drop at 40 percent. Moreover, The New York Times reported that in some cases, Mexicans were sending money to their cash-strapped U.S.-based relations, reversing a long-standing tradition.

Pope Benedict XVI in July issued a new encyclical, “Caritas in Veritate” (Charity in Truth), in which he touched upon some points of economics.

When business leaders make themselves exclusively answerable to their investors, they limit their enterprise’s social value and often sacrifice long-term sustainability for short-term profits, Pope Benedict said. He wrote that outsourcing labor to other parts of the globe should be limited in nature and only done when it is advantageous to the economic welfare of all involved.

“Labor and technical knowledge are a universal good,” the pope said in the encyclical. “Yet it is not right to export these things merely for the sake of obtaining advantageous conditions, or worse, for purposes of exploitation, without making a real contribution to local society by helping to bring about a robust productive and social system, an essential factor for stable development.”

Flying to the Czech Republic for a pastoral visit in September, the pope said he was happy with the debate engendered by the encyclical, adding that his aim was “to initiate and motivate a discussion about these problems, to not let things be as they are, but to find new models of a responsible economy both in individual countries and for the whole of humanity.”

It seems glaringly evident today, he said, that ethics should not be excluded from the economy. The pope added that economic systems “do not work if they do not take into account the human values of solidarity and mutual responsibility.”

Volunteers at the U.S.-Mexico border voiced fears that the slumping economy was bringing about an increase in domestic violence, especially among immigrant populations.

Children, too, were vulnerable to the ongoing slump. The Child and Youth Well-Being Index, compiled each year since 1975 by Kenneth Land, a sociology professor at Duke University, showed that the quality of life for children had dropped significantly since its peak in 2000 and was expected to decline further as long as the economy continued its tailspin.

The immediate outlook, according to FADICA’s Butler, was not good. “The climate is a real tough one in the whole nonprofit sector, both for the donors and for the nonprofit groups.”

While charities were narrowing their focus where possible to get “a bigger bang for their dollar,” he added, more troubling to Butler was a recent study from the University of Notre Dame that indicated that 12 percent of Catholics give nothing – not in offertory envelopes at church, not to other Catholic organizations, not even to secular groups.

The Giving USA Foundation reported that charitable giving in 2009 was down 2 percent from record levels in 2007.

Despite the sluggish economic situation in which many Americans find themselves, some Catholic groups are looking to the future.

Even though the number of U.S. poor jumped by nearly 3 million since last year to an estimated 39.8 million in 2009, Catholic Charities USA is looking for ways to cut the number of poor in half by the year 2020. At its national convention in September, it enlisted its 170 partner agencies across the country to devise strategies to bring the number of poor down.

“As people of faith we can make a difference to develop and shape a new American economy, one that provides a living wage and one that provides the benefits where people don’t have to rely on government benefits,” said Father Larry Snyder, executive director of Catholic Charities USA, during an October conference in Washington.

“We can, and must, work to reshape our economy so there is a balance and pay equity for all workers,” he said.