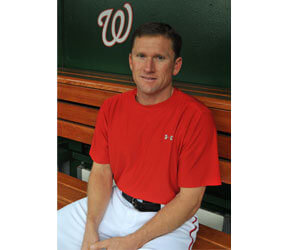 WASHINGTON – “God doesn’t put anything in your life that you can’t handle.”

Rick Eckstein, the hitting coach for the Washington Nationals, remembers his mother saying that when the family of seven found out that, while in high school, Susan, Eckstein’s oldest sister, suffered from glomerulonephritis, a genetic kidney disease that leads to kidney failure.

The words – and a strong Catholic faith – sustained him throughout that first family medical challenge in 1988 and the many that have followed.

The disease, passed down from the children’s father, Whitney, has affected the entire family. Those who do not suffer from it – including Eckstein and his youngest brother, David, a former National League all-star – have made their contributions by donating kidneys. Eckstein’s mother, Patricia, donated her kidney to Susan in 1989. Since then, Eckstein’s other sister, brother and father have all received transplants.

Last December, Eckstein took his turn at the plate, donating a kidney to his brother Ken. It was a decision that he made last summer when Ken was on dialysis and “it was touch and go,” Eckstein said, sitting in his red and white uniform in the Nationals dugout during a recent home stand.

“I started thinking about him a lot,” he told the Arlington Catholic Herald, newspaper of the Diocese of Arlington, Va. “One morning I woke up and I knew – I knew – (without) a shadow of a doubt that I was going to donate to my brother. I didn’t even know my blood type, I didn’t know if I would match … but I knew I was doing it.”

With the full support of his fiancee, Caroline FitzPatrick, Eckstein went to Nationals Park, talked to the team trainer and set up an appointment for a blood test. Two days later, he got the news: He was a match.

He started his paperwork in September, taking evaluations and tests. Everything was compatible, and Eckstein was raring to go. He pushed for an earlier date than the ones first proposed by the doctors. Not late January, not mid-December, but Dec. 8, the feast of the Immaculate Conception.

Soon after regaining consciousness following surgery, Eckstein only wanted to see Ken. He told the nurse he would walk to his room if they didn’t get a wheelchair.

“I saw him,” Eckstein said. And that moment was like one he’d never experienced. “I had some tears in my eyes. When you are able to give, it really puts a lot of things in perspective.”

“Driving home in the car, it was like ‘wow, what just happened?’ ” he added. “You could feel the prayers and the strong faith.”

This strong Catholic faith stems from Whitney and Patricia, who raised a family of five children in Sanford, Fla. – coincidentally just under 70 miles from where the Nationals train in Viera, Fla.

“Both parents have always had a strong faith,” said Eckstein, who attended All Souls Church in Sanford, where he received all his sacraments and served as an altar boy for nearly 10 years. “It’s something to this day that I rely on in good times and in tough times. That’s the foundation of the stability and the strength and the peacefulness.”

After his surgery and donation, Eckstein left the hospital in record time. In January, just weeks later, he took his mother on a tour of Italy, including stops in Rome and the Vatican. He got back into full baseball swing at spring training and is now at his job and working as normally as if he still had two kidneys. As for Ken, he recently vacationed in London.

In his very public position with the Nationals’ organization, Eckstein relies on his faith to help him keep things in perspective – a feat that isn’t always easy.

“Everybody’s scrutinizing every move and every decision, (and my faith) allows me to maintain a mindset that’s stable,” he said.

He allows God to show him the way.

“I put a lot of things on my heart to allow him to lead me,” he said. “I think a lot of times we try to control everything and in reality we can’t control most anything. A lot of times I have to sit back and go, ‘OK, God … it’s in your hands.’“