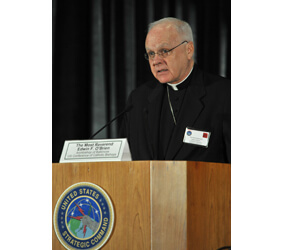 Bishops can be classified lots of ways, from the canonical (coadjutor, auxiliary, etc.) to the political (liberal, moderate or conservative). For those inclined to creativity, however, here’s a novel bit of taxonomy: The “Only Nixon could go to China” bishop, meaning a prelate able to say or do paradigm-changing things because nobody can question his credentials as a loyal man of the church.

Increasingly, America’s premier example is Archbishop Edwin O’Brien of Baltimore, a no-nonsense champion of Catholic doctrine and discipline, and someone who, in the words of Baltimore native and Catholic writer George Weigel, “would happily take a bullet for the church.” Consider how O’Brien has spent that capital:

• Veteran leader in seminary formation and a rock-solid theological conservative, O’Brien has demanded greater transparency and accountability from the Legionaries of Christ despite the order’s image as a favorite of the late Pope John Paul II.

• A former West Point chaplain and military archbishop with a hawkish reputation, O’Brien recently strode into the heart of the military establishment at the United States Strategic Command in Omaha, insisting upon the elimination of nuclear weapons.

• A one-time proponent of the death penalty, O’Brien now champions abolition – talking about his conversion in a way that has prompted “soul-searching” among even the most conservative legislators, according to Mary Ellen Russell of the Maryland Catholic Conference. He’s also spoken passionately in defense of immigrants.

Delivered by someone else, these messages might be dismissed as liberal rants. Coming from O’Brien, they pack more punch – in part because, as Fr. Tom Hurst, rector of the Sulpician-run St. Mary’s Seminary in Baltimore and a longtime friend, says, “the words ‘O’Brien’ and ‘liberal’ don’t go in the same sentence.”

Despite the buzz around him these days, O’Brien insists he has no interest in celebrity: “I have enough to do without looking for headlines.” Just by being himself, however, he is rapidly becoming one of the more intriguing figures on the ecclesiastical landscape.

Edwin Frederick O’Brien was born on April 8, 1939, in the Bronx, one of three brothers (the other two are deceased). Ordained in 1965 by New York’s Cardinal Francis Spellman, his first assignment was as a chaplain at West Point, marking the beginning of two lifelong passions: the military and the formation of future leaders.

“It gave me a great appreciation for the sacrifices 18- and 19-year-olds are willing to make, and their idealism,” O’Brien said. His drive to inspire a priestly esprit de corps, he said, was influenced by the experience.

O’Brien spoke to NCR by phone from Italy, where he was on vacation.

After West Point, O’Brien became an Army chaplain, serving in Vietnam. O’Brien said he requested airborne service because cadets he’d known were headed there, and he wanted to be at their side – when necessary, “to bury them too.” To this day O’Brien defends America’s intentions in Vietnam, though he says the war was crippled by “ineptitude and political fumbles.”

Later he held a number of senior positions in New York, including secretary to Cardinals Terence Cooke and John O’Connor, and two terms as rector of Dunwoodie seminary. In between, he served from 1990-94 as rector of the North American College in Rome.

At the college, it didn’t take long for O’Brien to impose a sense of direction. One priest present for O’Brien’s first meeting with seminarians said, “You felt like stapling a salute to your forehead.” O’Brien also persuaded bishops to send talented faculty and students, insisting that the college must do more, as Weigel put it, “than sponsor dinners at which spurious Italian nobility show up.”

In 1997, O’Brien was named archbishop for the U.S. military. In 2005, the Vatican tapped him to head up a review of U.S. seminaries and religious houses of formation in the wake of the sexual abuse crisis. The review confirmed O’Brien’s reputation as a deft administrator.

“He made the trains run on time,” said Redemptorist Fr. Thomas Picton, president of the Conference of Major Superiors of Men, “and these were some fairly unwieldy trains.”

For the better part of a decade O’Brien was touted as a leading candidate for New York, until being named to Baltimore in July 2007.

One longtime friend said, “If the pope offered him a choice between heaven and New York, I’m sure he’d take New York.” Yet O’Brien has embraced Baltimore – even, friends say, managing to keep his passion for the Yankees largely under wraps.

TALKING TO THE GREAT WALL

In some ways, O’Brien’s approach to leadership can be read as a blend of Cooke and O’Connor. Cooke was installed as archbishop on April 4, 1968, the day of Martin Luther King Jr.’s assassination, and led the church during an era of enormous turbulence.

Cooke “was a social worker by training, and had a deep care for the poor,” O’Brien said. “His goal was to move the whole church forward, but together. He was willing to live with those tensions.”

From O’Connor – who often cared more about wielding the bully pulpit of his office than sweating the administrative details – O’Brien said he learned to trust subordinates.

“His first prayer every morning was to never get in the way of anybody trying to do good,” O’Brien said. “He was always willing to listen, with great openness.”

Despite those influences, O’Brien clearly has his own style. Ask people who know him, and the same basic adjectives emerge: decisive, caring, with a deep love for the priesthood.

“When you go to this man, he really listens,” said Monsignor James Dixon, O’Brien’s former vicar general at the military archdiocese. “But once he makes up his mind, you might as well talk to the Great Wall of China.”

Russell said she’s been struck by the “depth of his compassion” and “great sense of humor.” Dixon warns, however, that O’Brien doesn’t wear his heart on his sleeve.

“He’s probably the biggest introvert I’ve ever met,” Dixon said, saying he was amazed during bishops’ conference meetings to watch other prelates networking while O’Brien “would be off in a corner with a personal pan pizza.”

O’Brien cheerfully concedes the point, even telling a story at his own expense. The late church historian Fr. John Tracy Ellis was a friend, O’Brien said, and the two would take trips together. Once, O’Brien said, they were on a bus, and Ellis tried to strike up a conversation. O’Brien didn’t bite, and eventually Ellis gave up, informing a traveling companion: “The blessed one is in one of his monosyllabic moods!”

Yet Hurst called O’Brien a “real priest’s priest,” saying that he’s “deeply concerned about what priests and laity think about the church they live in.” For that reason, Hurst said, he wasn’t surprised by O’Brien’s willingness to take on the Legionaries, since it reflected “real concerns in Baltimore when he got here.”

NOT EVERYONE’S CUP OF TEA

To be sure, O’Brien isn’t everyone’s cup of tea. Whatever acclaim he’s presently drawing from liberals is likely to be short-lived. This is a bishop, after all, with scant patience for “cafeteria Catholicism,” who joined the fusillade of criticism of the University of Notre Dame over its invitation to President Barack Obama, and who in 2008 devoted three weekly newspaper columns in a row to a ringing defense of church teaching on birth control.

Moreover, Hurst concedes that what some admire as decisiveness can seem to others like shoot-from-the-hip impetuousness. O’Brien drew early criticism in Baltimore for his removal of a popular pastor who had allowed a female Episcopal minister to assist at a funeral Mass, and recently for the closing of a Catholic school with just a few weeks left in the summer. (The pastor was eventually reassigned, and O’Brien has impaneled a blue-ribbon commission on the future of Catholic schools.)

Yet O’Brien’s willingness to tackle problems head-on, regardless of whose ox might be gored, draws respect across party lines.

O’Brien says there’s no plan for his next crusade, just as there’s been no blueprint up to now. He inherited the controversy over the Legionaries from his predecessor Cardinal William Henry Keeler, he said, and he gave the nuclear speech because he was asked to do so by staff at the U.S. bishops’ conference.

Nonetheless, O’Brien hinted that the next time one of those “Only Nixon could go to China” moments rolls around, he’s not planning to duck.

“What I pray for is that I won’t find myself not facing up to issues out of a sense of uncertainty, a fear of failure or a desire for acceptance,” he said. “I don’t want to yield.”

It’s hard to avoid thinking that “yield” is another one of those words that just doesn’t belong in the same sentence with Edwin O’Brien.