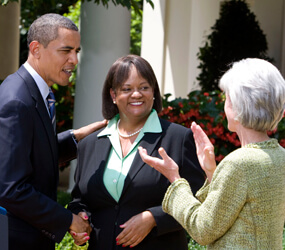 WASHINGTON – Sister Carol Keehan, president and CEO of the Catholic Health Association, said July 13 she thinks “this nation is so fortunate to have Regina (Benjamin) as surgeon general.”

The Daughter of Charity made the comment in reaction to President Barack Obama’s announcement earlier that day that he was nominating Dr. Regina Benjamin to be the surgeon general of the United States. The Senate must confirm the nomination.

Benjamin, a Catholic, is founder and CEO of Bayou La Batre Rural Health Clinic in Bayou La Batre, Ala. She is renowned for her outreach to the poor, seeing patients regardless of their ability to pay for her services. When her clinic was destroyed by Hurricane George in 1998 and again by Hurricane Katrina in 2005, Benjamin personally financed its reconstruction.

Benjamin belongs to the Shrine of the Holy Cross Parish in Daphne, Ala., a historically African-American parish that her mother helped found. She holds a medical degree from the University of Alabama School of Medicine in Birmingham and a master’s degree in business administration from Tulane University in New Orleans.

She was the first African-American woman and the first person under 40 to be elected to the board of trustees of the American Medical Association.

“If you look at her resume, she could have made a ton of money,” Sister Keehan said. “Instead she chose to stay in one of the poorest communities in Alabama to take care of people.”

Pope Benedict XVI awarded Benjamin the Pro Ecclesia et Pontifice Cross, a papal honor, in 2006. She also began a three-year term on the CHA board that year.

Monsignor Michael Farmer, chancellor of the Archdiocese of Mobile, Ala., said Benjamin was nominated for the papal honor because of “her commitment to her faith as well as for putting her faith into practice.”