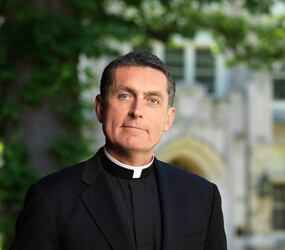 Change is rarely easy, but few do it better than Loyola College in Maryland.

The Jesuit institution has grown from a commuter school for men, to one that includes women, to one of the nation’s top Catholic colleges, thanks to top-notch undergraduate and graduate programs.

Founded in 1852, Loyola is ready for another milestone, as it officially becomes Loyola University Maryland Sept. 25. Simultaneously, its School of Arts and Sciences will take the name Loyola College.

A two-day celebration will feature a convocation at the school’s Reitz Arena, where Archbishop Edwin F. O’Brien will receive a Doctor of Humane Letters degree, one of the first issued by Loyola University under its new designation.

Loyola’s 2008 announcement of the designation was met with resistance. One recent female graduate, who Father Linnane knew well, wrote that Loyola would be forever changed. He responded with a reminder of Loyola’s history, that for over a century, it was for males only.

“You’re a young woman who isn’t from Baltimore,” Father Linnane told her, “so if those changes hadn’t been made, where would you be and more to the point, where would Loyola be?”

Older graduates say that evolution is in the school’s DNA.

Loyola’s first classes were taught in a modest house in Baltimore. In 1855, it moved to the city’s Mount Vernon neighborhood. In 1922, it moved to its present location on Charles Street.

Jere Hamill, class of 1944, said none of the changes were the result of a drastic decision.

“I’m glad to see them changing,” said Hamill, 87. “It’s the natural evolution of the school. Loyola is a conservatively-operated enterprise. When changes occur, it generally comes with a great deal of thought.”

Many of the changes were engineered by the late Jesuit Father Joseph A. Sellinger, as Loyola experienced tremendous growth during his 29-year tenure as president.

Within three years of his taking office in 1964, dormitories were built and a masters in business education was established, a program that now bears his name.

In 1971, women arrived on campus, thanks to a merger with Mount St. Agnes College. Eventually, Loyola transitioned from a local to a regional college.

George Miller’s freshmen year coincided with the addition of women, a bit of a shock after attending an all-boys high school, Calvert Hall College in Towson.

“It was a seismic shift for me,” said Miller, now the school’s associate director of campus ministry.

Loyola adjusted, school officials and graduates said, because the community wanted to be inclusive, just as it is now. Miller says that students grew because of an over-arching educational philosophy.

“That time in a particular person’s life, they are naturally asking the big questions in this university setting,” Miller said. “As products of a Jesuit educational system, it’s definitely encouraged to call everything into question.”

Philadelphia native Gerry Geckle was one of the first female students when she transferred to Loyola in 1971, but did not view herself as a trailblazer.

“I don’t think we were cognizant in the same way we are today,” said Geckle, vice president of corporate human resources for Wyeth Pharmaceutical. “It was a great learning environment in how to navigate the business world. Certainly, it prepared me to be the only female on a management team.”

Geckle’s son, Christopher, is now a sophomore at Loyola, choosing it over a scholarship to another Catholic college.

Once a student, she found a drastically different campus when she returned as a parent. Approximately 84 percent of students live on campus. New buildings have changed the landscape, and a new athletic complex is under construction, less than two miles west on Cold Spring Lane.

Some things haven’t changed, as Loyola boasts an intimate student-to-teacher ratio of 12:1. The mission hasn’t changed either, as Loyola remains dedicated to serving surrounding neighborhoods and the world.

As Loyola transitions into its next phase, Father Linnane is confident more young people will find a home at Loyola University Maryland.

“All of our development to this point brought us to the next logical step,” Father Linnane said, “which is to aspire to be the leading Catholic comprehensive university in the nation.”