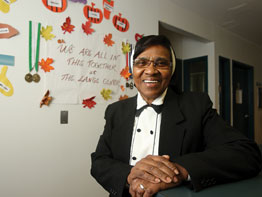 Oblate Sister Mary Claudina Sanz, who founded a center for abused and neglected girls a decade ago, has received the Thurgood Marshall Legacy Award for community service from the Baltimore branch of the NAACP.

Girls at the center – up to 15 live there at a time – come from families scarred by crime, drugs, poverty, death or abuse.

“The goal is to instruct them, to teach them that this is not the only way,” Sister Claudina said.

“I was always drawn to the child who was most needy,” she said. “I think they have a need for something positive.”

Tessa Hill-Alston, who chairs the NAACP’s Freedom Fund Banquet, where Sister Claudina received the award, said in a statement that the sister had devoted her entire life to taking care of others.

“We’re honored she is going to allow us to thank her for her leadership in the city, her compassion for those in need and her dedication to creating a safer and better world for children in Baltimore,” the statement said.

“It’s a positive outlook on self and life and God,” Sister Claudina said. “I would say we adopt her charisma: Providence provides.”

Sister Claudina began her effort to start the Mary Elizabeth Lange Center after her election in 1993 as the 17th superior general of the Oblate Sisters of Providence, the nation’s first women’s religious order for African-Americans.

Most of the girls who have lived at the center have attended public schools, but some have gone to St. Frances Academy, the Oblate-run high school next to the center.

The Lange Center seeks to reunite girls with their families, when possible. Barring that, the center tries to have them adopted or teach them skills so they can live in post-adolescent homes.

Ms. Lindsay, a parishioner at New All Saints, Liberty Heights, has served as president of the Baltimore Continental Societies Inc. The group raises funds for more than 10 local, children-centered programs and helps teach and mentor youths.

She also has worked with the Delta Sigma Theta Sorority, the Forest Park School Employment Program, the YWCA and the Mother Mary Lange Center.

Ms. Lindsay has written Africentric columns for The Catholic Review and serves on the governing board of its publisher, the Cathedral Foundation, a Catholic communications company in service of the church.