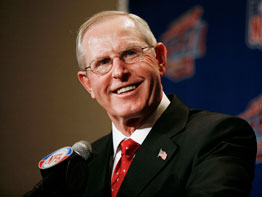 ROCHESTER, N.Y. – Mayor Ted Young of Waterloo sees a link between the success of the New York Giants and St. Mary Parish in his Seneca County village.

He and Tom Coughlin, the Giants’ head coach, are 1960 graduates of the parish grade school. Young believes Coughlin’s Catholic-school upbringing helped shape his coaching achievements in college and the National Football League.

“I think it played a large part. It sets your life values, and your values are set very early on,” Young said in an interview with the Catholic Courier, newspaper of the Rochester Diocese.

Young noted that he and Coughlin were both altar boys at St. Mary, and that Coughlin’s penchant for orderliness could well be traced back to the nuns who taught them.

He recalled that “Tom was very dedicated no matter what he did, as far as sports and schoolwork.”

He acknowledged Coughlin’s reputation as a stern disciplinarian – a tag that’s led to occasional conflicts with his players. Yet Young asserted that his childhood friend’s intensity and passion have reaped big rewards.

“Say what you want, he’s been successful everywhere he’s gone,” Young said. “His values, his determination, his dedication – if a little bit of that can be instilled in the players he’s coaching, that can instill success. A coach like Tom drives you to put heart into what you’re doing.”

Such qualities came in handy in the NFL’s National Football Conference title game Jan. 20, as the Giants pulled out a 23-20 overtime victory in subzero temperatures in Green Bay, Wis., over the host team, the Green Bay Packers. The upset earned the team a Super Bowl date with the New England Patriots Feb. 3 in Arizona.

These are pretty lofty heights for the 61-year-old Coughlin, whose early exposure to football involved pickup games with Young and other neighborhood youths.

Young and Coughlin went on to play football together at Waterloo High School, where Coughlin still holds the school record of 19 touchdowns in a season. Coughlin was then a star receiver at Syracuse University before he moved into coaching.

His first NFL head-coaching position was with the expansion Jacksonville (Fla.) Jaguars, beginning in 1995. He had an eight-year record of 72-64, reached two American Football Conference title games, and was named NFL Coach of the Year in 1996. Coughlin became the Giants’ coach in 2004 and has a record of 38-31.

Young said many of Coughlin’s schoolmates and family members still reside in the Waterloo area. He added that the coach has stopped back frequently over the years, attending Sunday Mass at St. Mary. Coughlin also was on hand in the fall of 2005 when Waterloo High School’s football field was dedicated in his name.

“Our lives went different ways, but he never really forgot where he came from,” Young remarked.

Coughlin and his wife, Judy, have four children and four grandchildren. In addition, he is involved in many charitable efforts. Young, noting that Coughlin is always warm and approachable whenever he passes through town, contended that this side of his old friend doesn’t receive nearly enough attention.

“The New York (City) media, they love you one minute and then if you blink wrong, they’re down your throat. Do they know the person? Absolutely not,” Young said.

But in Waterloo, a village of about 5,000 people, Young said that “the pride in the community for Tom has always been there.”