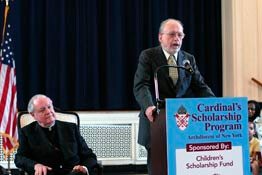 NEW YORK – A New York philanthropist has donated $22.5 million to the
Archdiocese of New York for its inner-city scholarship program, the archdiocese announced May 23.
The donation, from former Wall Street investor Robert Wilson, will enable 3,000 children to attend Catholic schools in New York City through the scholarship program launched two years ago to provide needy students with partial- or full-tuition grants.

Wilson, an 80-year-old atheist, told reporters after the donation was announced that he had no problem supporting a fund for Catholic school students. “Shunning religious organizations would be abhorrent,” he told Bloomberg News. “Keep in mind, I’m helping to pay tuition. The money isn’t going directly to the schools.”

New York Cardinal Edward M. Egan praised Wilson for his “historic and far-sighted support.”
After learning about Wilson’s donation, another donor, who wished to remain anonymous, contributed $4.5 million to the archdiocesan scholarship program.

Since it began in 2005 as a partnership with other New York scholarship programs, the Cardinal’s Scholarship Fund has awarded 3,700 scholarships with a maximum individual tuition value of $2,100 per year.

The archdiocesan scholarship fund, with the two new donations, has raised $97 million toward its goal of $158 million. The fund aims to fill every empty seat in archdiocesan city schools by 2010.

Yearly scholarship amounts range from $500 to $2,000 and are determined by financial need and school tuition. Last year the program awarded more than $5 million in scholarship assistance for families with an average income of $21,715.

There are 107 inner-city Catholic elementary schools in New York. Ninety-three percent of the students at these schools are minority. Nearly 40 percent are non-Catholic and more than 50 percent are near or below the federal poverty level.

Students attending New York’s Catholic inner-city elementary schools have out-performed New York’s public school students in fourth- and eighth-grade math and English standardized tests every year for the past five years. Ninety-eight percent of Catholic high school seniors in New York graduate in four years and nearly all of them are admitted to college.