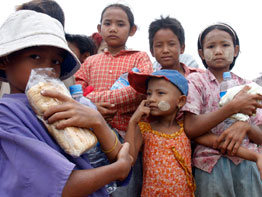 LEIEINTAN, Myanmar – Pascal Than Hlaing is just one of many who are grieving in Leieintan, a village where only one house is left standing and the Baptist and Catholic churches had their roofs torn open.

Mr. Than Hlaing mourns the death of two of his three children.

“One of my sons was swept away when the water level was up to his neck,” the 31-year-old Catholic father told the Asian church news agency UCA News May 9, referring to his 6-year-old boy. Cyclone Nargis hammered the Irrawaddy delta region early May 3 as it blew in from the Bay of Bengal, sending a wall of seawater inland for miles.

Several days later, Mr. Than Hlaing’s 3-year-old son “passed away after he caught a cold.” Now he and his wife are left with their remaining son; they are being sheltered in the Baptist church because their home was destroyed.

A small Catholic Church volunteer group from the Yangon Archdiocese that arrived within days of the cyclone began assisting Mr. Than Hlaing and the rest of the 3,000 residents of the village about 75 miles southwest of Yangon. Leieintan was accessible only by boat, given the trees, downed electricity pylons and other cyclone debris blocking the roads.

The humanitarian disaster littered the partially flooded fields in this and other villages with the decomposing bodies of people and cattle. Other bodies float past in the river. U.N. officials have said up to 100,000 people are either dead or missing.

Mr. Than Hlaing’s blank expression tells what words cannot of the horrors that he and hundreds of thousands of others face in the delta area, the rice bowl of Myanmar.

The Catholic volunteer group of three laypeople, their parish priest and a priest from Yangon had their work cut out in assessing the enormity of the needs in this village, one of the worst-hit in Yangon archdiocesan territory.

They arrived May 9 and the next day began bringing in food and diesel fuel by boat from Pyapon. The fuel is for running a rice-husking machine in the village and pumping out dirty water from a tank of drinking water. The church workers also began distributing sacks of rice and clothes.

One of the volunteers, Mary Khin from the Karuna Myanmar Social Services’ office in Yangon, said she was “shocked” and it “pained” her to see all the dead bodies of people and animals that washed in at night over the delta. Karuna Myanmar is the local Catholic Church’s relief and development organization.

Villagers were trying to come to grips with the tragedy. About 70 were living in the one house left standing, 150 in the Baptist church, and 20 more in St. Joseph’s Catholic Church. The rest were staying in the wreckage of their homes.

Ko Naing, 30, a Buddhist, told UCA News that his only child, just a year old, died in the nighttime flood.

“My wife can’t swim, so we had to hang on to a tree. I picked her up to put her up the tree, and at the same time the water swept away my child,” he said. They did not see the baby again.

One woman, who gave her name as Rosy, said her 4-year-old son was washed away by the flood and she and her husband climbed a tree in the dark to stay above the water, which rose to 13 feet.

On May 8, Archbishop Charles Bo of Yangon hosted the visiting apostolic delegate to Myanmar, Archbishop Salvatore Pennacchio, for a tour of the disaster area.

More than 15 villages simply disappeared. About 70 percent of the trees in Yangon were uprooted. All churches, priests’ houses and convents have been damaged, Archbishop Bo said.

The church in Myanmar has appealed for international aid. Through the newly formed Myanmar Disaster Relief Committee, under the leadership of the Yangon Archdiocese, the local church has begun offering food, clothing, shelter materials and medicine to the affected people.

The greatest destruction occurred in the area of Yangon, Myanmar’s capital and largest city, and the Irrawaddy delta region to the southwest, covered by the Pathein Diocese.