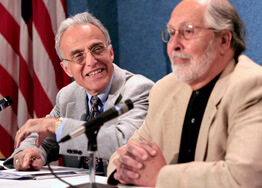 WASHINGTON – For the first time, more than 100 senior Muslim leaders from around the world sent a letter to Pope Benedict XVI and other Christian leaders proposing theological similarities as a basis for peace and understanding.

“Finding common ground between Muslims and Christians is not simply a matter for polite ecumenical dialogue between selected religious leaders,” said 138 Muslim leaders in a letter released Oct. 11 in Washington.

Christians and Muslims “make up more than 55 percent of the world’s population, making the relationship between these two religious communities the most important factor in contributing to meaningful peace around the world,” they said. “If Muslims and Christians are not at peace, the world cannot be at peace.”

The leaders from Asia, Africa, Europe and North America called for Christians and Muslims to “vie with each other only in righteousness and good works.”

The letter analyzed particularly two theological similarities found in the Quran and the New Testament: belief in one God and love of neighbor.

French Cardinal Jean-Louis Tauran, president of the Pontifical Council for Interreligious Dialogue, told Vatican Radio Oct. 12 the letter is “a very encouraging sign because it demonstrates that good will and dialogue are capable of overcoming prejudices.”

The cardinal said all religious leaders must call on their followers to affirm “the three convictions contained in the letter: that there is one God; that God loves us and we must love God; (and) that God calls us to love our neighbor.”

“It is a spiritual approach to interreligious dialogue,” he said, and one that calls upon Muslims and Christians to respond to one basic question: “Is there really only one God in your life?”

He said the letter was particularly important because it was written and signed by both Sunni and Shiite Muslim leaders.

Anglican Archbishop Rowan Williams of Canterbury “welcomed the letter as a clear reaffirmation of the potential for further development of existing dialogue and common action between Christians and Muslims and other faith communities,” said an Oct. 11 statement on his Web site.

The Muslim leaders’ letter, sponsored by the Jordan-based Royal Academy, was released a year after 38 Muslim leaders sent a letter to Pope Benedict in response to his remarks in Regensburg, Germany, referencing Islam and violence.

In contrast to that letter, this letter “seeks not to be reactive but instead to initiate” theological discussion, said John Esposito, professor and founding director of the Prince Alwaleed bin Talal Center for Muslim-Christian Understanding at Georgetown University in Washington.

At a press conference to release the text, he said the letter is addressed to Christians but will resonate with Muslims around the world. The letter was signed by representatives of various sects of Islam, a religion not centralized around a hierarchical structure, such as Catholicism.

“The next step is for Christian leaders themselves to come together in a response,” said Esposito.

When asked why Jews were not sent the letter, Sayyed Hossein Nasr, a professor at George Washington University in Washington and a letter signatory, said it is “a theological letter and not a political letter.” He said he hoped a letter reaching out to all faiths from Muslim leaders would be sent in the future.

Contributing to this story was Cindy Wooden at the Vatican.