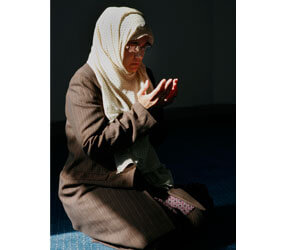 WASHINGTON – American Muslims are more optimistic about their future than people of other religions are about their own, though Muslims say they regularly contend with suspicion and lack of respect for their faith.

A decade after the Sept. 11, 2001, terrorist attacks, new results of polling by Gallup’s Abu Dhabi center also finds a great deal of similarity between American Muslims and Jews about issues such as opposition to the Iraq War and whether Muslims face prejudice.

The study offered recommendations for government and civic leaders aimed at improving the way Muslim Americans are included in U.S. life, including treating Islamophobia and anti-Semitism as related phenomena and addressing discrimination against Muslims in a similar manner.

Several recommendations hinged on multifaith strategies for defusing Muslims’ lower-than-most levels of trust in institutions such as the FBI and police; for helping Muslims become more engaged in civic society and for addressing other Americans’ prejudice and distrust of Muslims.

At an Aug. 2 news conference where the report, “Muslim Americans: Faith, Freedom and the Future” was released, Imam Mohamed Magid, president of the Islamic Society of North America and an immigrant from Sudan said when he first arrived in the United States he studied African-American history. He was particularly struck by the “we shall overcome” themes of the civil rights era, which “gave me lots of hope,” he said.

But the 9/11 terrorist attacks and a backlash against Muslims “changed the narrative,” said Magid, who also has roles in Washington-area organizations promoting interfaith understanding.

Magid said from his role in counseling members of his mosque, he knows Muslim Americans to generally be very optimistic and that he was pleasantly surprised to learn this attribute applies nationwide.

By large majorities, the study found Muslim Americans optimistic about life today (averaging 7 on a 10-point scale) and five years from now (averaging 8.4 on that scale). Among other faith groups, the numbers were similar – nearly all averaging more than 7 on the 10-point scale.

The study also found Muslims were likely to say the economy is getting better and that national economic conditions are improving. More than half of Muslims expressed optimism on those two questions, while no other faith group had a response greater than 45 percent.

The results of the study were drawn from the Gallup Nightly poll between January 2008 and April 2011 and two polls of Muslim Americans administered in February-March and October of 2010. The margins of error for Muslims in the two types of polls were listed at plus or minus 1.9 for the Nightly poll and at plus or minus 6.6 points for the Muslim-American polls.

The U.S. Census Bureau does not question people about their religion, but the Pew Forum on Religion & Public Life estimates the number of Muslims at about 2.5 million people, or .8 percent of the population. That represents about 0.2 percent of the world’s Muslims.

The study found Muslims to be more like Jews than other religious groups in their views on an assortment of topics. For example, 83 percent of Muslims and 74 percent of Jews polled said the United States made a mistake by sending troops to Iraq. Among other categories reported, the only group in which a majority (67 percent) said the Iraq War was a mistake was those listing themselves as “no religion/atheist/agnostic.” The figure for Catholics describing the war as a mistake was 49 percent, for Protestants 45 percent and for Mormons 32 percent.

Jews were even more likely than Muslims to say “in general, most Americans are prejudiced toward Muslim Americans,” at 66 percent. Sixty percent of Muslims agreed with that statement, compared to 51 percent of Catholics, 48 percent of Protestants, 47 percent of Mormons and 54 percent listing no religious ties.

Muslims and Jews also were likelier than other faith groups to say Muslims in the United States are loyal to the country. That statement was said to apply to Muslims by 93 percent of Muslims, 80 percent of Jews, 69 percent of those listing no religious ties, 59 percent of Catholics, and 56 percent each of Mormons and Protestants.

Rabbi David Saperstein, director and counsel of the Religious Action Center of Reform Judaism, said at the news conference that some of those areas of commonality may stem from the Jewish view of their people as “quintessential victims throughout the history of the world.”

This also has made American Jews sympathetic historically to the plight of African-Americans, he said. But another factor is that American Jews, like American Muslims, tend to be highly educated, which would help explain some similarity of views, said Rabbi Saperstein.

Nearly half of Muslims, 48 percent, said they have personally experienced racial or religious discrimination. The next greatest affirmative response to that question was from Mormons, at 31 percent, with 21 percent of Jews, 20 percent of Catholics and 18 percent of Protestants agreeing.

Several panelists agreed with the study’s recommendations about engaging Muslims and people of other faiths to help better integrate Muslims into U.S. society and to counter suspicion of Muslims among other Americans.

“Many Americans have not met a Muslim,” said Magid. “Interfaith work can change people’s perceptions.” He’s seen that start to bear fruit in his northern Virginia interfaith efforts, he said.