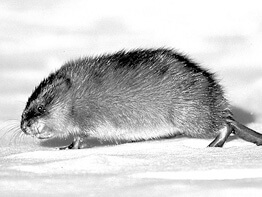 RIVERVIEW, Mich. – There’s an alternative to fish for some Michigan Catholics abstaining from meat on Fridays in Lent – muskrat.

The custom of eating muskrat on Ash Wednesday and Fridays in Lent apparently goes back to the early 1800s, the time of Father Gabriel Richard, an early missionary in Michigan whose flock included French-Canadian trappers. Legend has it that because trappers and their families were going hungry not eating flesh during Lent, he allowed them to eat muskrat, with the reasoning that the mammal lives in the water.

The story varies on just where in Michigan the dispensation extends. Among areas mentioned are along the Raisin River, along the Rouge River, both of which flow into Lake Erie south of Detroit, Monroe County in the southeast corner of Michigan, or all of southeast Michigan.

The Detroit archdiocesan communications department said there is a standing dispensation for Catholics downriver – in Detroit’s southern suburbs and below – to eat muskrat on Fridays, although no documentation of the original dispensation could be found.

A 2002 archdiocesan document on Lenten observances, in addition to outlining the general laws of fast and abstinence, says, “There is a long-standing permission – dating back to our missionary origins in the 1700s – to permit the consumption of muskrat on days of abstinence, including Fridays of Lent.”

The prospect of eating muskrat, a foot-long rodent, might be less than appetizing to some, but to many people downriver it’s part of Lenten life.

Bill “Pip” Chinavare was president of the sports club for 29 years and still heads up the muskrat fundraiser. His wife, Candy, said not many women participate in the annual dinner.

“The majority of women can’t get past the ‘rat’ thing,” she said.

Father Russ Kohler, pastor at Most Holy Trinity Parish in Detroit and a downriver native, is a regular at the St. Charles Borromeo muskrat dinners. He said the trick to making the muskrat edible is in the marinade, a secret recipe based on a French liqueur.

He said he never ate muskrat before he attended the dinner while filling in at St. Charles as a priest. He’s tried to make the dinner every year since then.

“I didn’t fall in love with the product until I could drink beer,” he joked.

He said muskrat has the consistency of chicken, but with a “unique” taste.

Johnny Kolakowski, owner of Riverview’s Kola’s Food Factory, has been eating muskrat since he was a kid. When he opened up his restaurant years ago, he put muskrat on the menu.

He can sell several dozen muskrat dinners on a Friday, but they were more popular back in the 1980s, when he would sell 150 a night. The tradition’s less popular with the younger crowd, but it’s not uncommon for young men to come in – with their cameras – and order a muskrat dinner.

Mr. Kolakowski, 59, a member of St. Stanislaus Kostka Parish in Wyandotte, said muskrat tastes the same as duck. Both animals live in the water and have the same diet – the only difference is one walks and one flies, he said.

His muskrats come from a trapper in Canada and they’re served with sides of sauerkraut and mashed potatoes and gravy. The best part of a muskrat is the hind legs, he said.

The late Bishop Kenneth Povish of Lansing wrote in a 1987 column in The Michigan Catholic, Detroit archdiocesan newspaper, that “no (formal) dispensation was ever given to allow Catholics to eat muskrat on Fridays.”

He referred to what he called the “Great Interdiocesan Doctrinal Debate” of 1956, during which he determined that although muskrat is a warm-blooded mammal and technically flesh, the custom had been so long held along Michigan’s rivers and marshes that it was “immemorial custom,” thus allowed under church law.

For the record, Bishop Povish didn’t much care for muskrat as a meal. He wrote that “anyone who could eat muskrat was doing penance worthy of the greatest of the saints.”