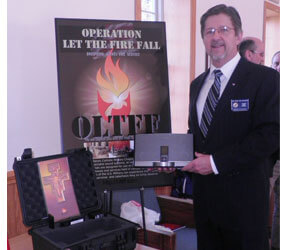 LIBERTYTOWN – In an age when social media and digital tools are sometimes cursed for their negative influence, a Frederick County parish and its Knights of Columbus chapter celebrated one of their own and his use of technology to spread the Word.

Bishop McNamara Council 13290 and Knight George Misulia accepted the Supreme Council award, a national Knights of Columbus honor for a worthy project, at a Feb. 6 Mass at St. Peter the Apostle in Libertytown.

A “Firebox” includes speakers, an iPod and a music-loaded website for Catholic military chaplains to enhance services and equip lay ministers to conduct Catholic lay services.

“The name of the project comes from Pentecost Sunday, where the Holy Spirit came down and allowed the Apostles to carry forward the message of faith,” said Peter Davio, state deputy of the Maryland Knights of Columbus. “Now we can use technology as the fire to take into that very same realm and allow us to support that very same mission.”

Because of a chaplain shortage and the remoteness of many military units, Davio said, some service personnel only see a priest two or three times a year.

Misulia, a music minister, musician and theology expert from Mount Airy, brainstormed the project in 2007, after a car accident gave him time to ponder ways to spread the Gospel.

After sharing the idea with friends and fellow Knights at St. Peter’s, where he is a parishioner, Misulia took it to other parishes. Davio heard about it while attending a Mass at St. Timothy in Walkersville. Through the Knights network, news of the project began to spread and the prototype units gained financial support.

The project was then shown to Archbishop Edwin F. O’Brien, who had spent 10 years as Archbishop of the U.S. Archdiocese of Military Services before coming to Baltimore in 2007. Endorsing the idea, the archbishop introduced Misulia’s team to the proper military authorities, leading it to be “blessed” throughout the military chaplaincy.

Now, 20 units are being used at bases from Afghanistan to Greenland and, the Pacific to Parris Island (S.C.), as well as U.S.S. Dwight D. Eisenhower, with 15 more on the way.

“Since the project involved the liturgy, we had to talk to the right people, and that’s where the Archbishop (O’Brien) guided us,” said Misulia, whose interaction with Archbishop Timothy Broglio, who now heads the military archdiocese, had an additional spinoff.

Because Misulia has a degree in theology, he was tapped to write a Catholic lay service that has been approved for lay ministers in the field to present non-sacramental services to both Catholics and non-Catholics.

Misulia said that Fireboxes cost $1,000, which includes hardware, shipping and setup. Operation Let the Fire Fall currently has 60 requests waiting for funding. His dream is first to outfit all 200 chaplains currently overseas, then to provide resources to Catholic lay ministers.

“This is a great way to use technology to carry our faith forward,” Bucheit said, “and all those people out in the military field in are their 20s, that’s their technology, that’s their way of understanding.”

Misulia’s leadership is appreciated by Father Jason C. Worley, his pastor since 2009.

“It seems like every time I turn around there’s something beautiful happening here at St. Peter’s,” said Father Worley. “You never know where these good works are going to sprout up, but you know they have to be springing from our parishioners.”

Father Worley noted in his homily that the Firebox project is an example of good works that must be “preserved if we are to be salt and light for the world.”