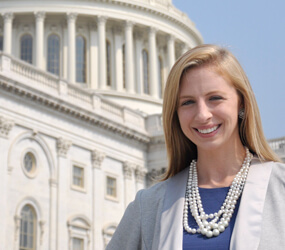 Two days after she graduated from Baltimore’s Loyola University Maryland May 21, Maura Gillespie was working for the third most powerful person in the United States.

Gillespie, a Catholic and New Jersey native, is a staff assistant for John Boehner, speaker of the House of Representatives and a Republican from Ohio. Gillespie began the job this past January, splitting time between Washington, D.C., and her classes in Baltimore.

“Working in this office is probably the greatest opportunity I’ve been given,” Gillespie said. “Sometimes it’s surreal walking to work and I’m looking at the capitol and at the dome and thinking, ‘Wow, this is where I work every day.’ ”
Gillespie interned in the Republican Cloakroom before her junior year. In fall 2010, when Boehner was minority leader, she got an internship in his office, working for course credits three days a week.

As it became clear Boehner would become Speaker of the House, thanks to Republican success in the November 2010 elections, Gillespie was offered a job. During her final semester, the political science major finished with two A’s, an A-minus and two B’s.

“It wasn’t easy, but I feel incredibly lucky to be where I am,” Gillespie said. “I really had to manage my time.”

Gillespie said: “(Boehner’s) schedule is crazy-packed from now until October. It’s busy, but the mood in the office is not reflective of that. People would be surprised that the speaker’s office right now is a lot more laid back than what people think.”
Gillespie said Boehner deserves credit for creating a sense of calm in his office and in the House.

“For someone who is third in line for the presidency, and has such immense respect from his colleagues on both sides of the aisle, he is incredibly down to earth,” Gillespie said. “He’s an incredibly humble man. He’s also very funny.”
Comedians routinely roast Boehner’s penchant for crying. He delivered the commencement address at The Catholic University of America last month and became emotional while talking.

Gillespie has seen him tear up meeting with sick children from the Make-A-Wish Foundation. Boehner’s two daughters are a source of pride as well.
“He can’t talk about his kids without getting a little emotional,” Gillespie said. “It’s his nature. It’s who he is.”

Boehner, a Catholic, was one of 12 children. Before his Catholic University speech, some Catholic academics had criticized him for cutting programs for the poor.

“I think America has a strong safety net for those who live near the bottom of our economy, and I think that we should,” Boehner told reporters in response. “And like any religion, you’ll have some who are a little bit more liberal and some are a bit more conservative.”

Gillespie said of Boehner: “I see a moral compass in him.”

Gillespie was in the House gallery with Boehner’s family when he was sworn in as speaker. She was also in the House for President Barack Obama’s State of the Union address this year.

“I was just in awe,” Gillespie said of that night.

She takes nothing for granted and is low key about her success.

“I know how hard it is to get jobs right now,” Gillespie said. “I don’t normally talk about it too much. It’s work to me. My friends are all really happy for me.”
Gillespie is enjoying her current job and envisions a career in law or politics. She is inspired every day in Washington to make a difference.

“I definitely know I’m in the right spot,” she said. “I love it here.”