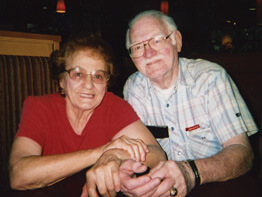 Allen Cohen sat comfortably at the head of his dining room table, chin in hand, elbow on tabletop, listening to his Italian wife of 60 years chatter about the two of them. He obviously had adapted a long time ago – being married 60 years Aug. 30 – to Jean Cohen’s liveliness and ability to overtake him in conversation.

Since literally “bumping” into her on the bumper cars at Carlin’s Park in Baltimore City at age 20, the 81-year-old Baltimorean has stayed by Mrs. Cohen’s side. Their five grandchildren often say, “When you see Grandpa, you see Grandma.”

“But she’s the boss of the family,” said Mr. Cohen playfully. “I’m never right. And I tell everybody, no matter how right I am, I’m still never right!”

His patient, calm and witty demeanor differs greatly from his wife’s feistiness and energy. “You’ve heard how opposites attract?” asked the white-mustached senior, jabbing a finger in the air toward his wife. “She’s serious, I’m not!”

The couple is opposite in faith as well – she is a practicing Catholic, he is Jewish. A parishioner of St. Joseph in Sykesville, Mrs. Cohen, 83, was born in Wilkes-Barre, Pa. As the fourth of 10 children, then Miss Jennie Bartorillo had to learn to speak up for herself.

“I’m more outgoing (than him),” she said, pointing back. “What you see is what you get.”

She later added, “I have to die first. He takes care
of me!”

In spite of their self-proclaimed opposite personalities, the active husband and wife work together at the local Wal-Mart, Mr. Cohen in the hardware department and Mrs. Cohen in the food section. Referred to as “Mr. and Mrs. Wal-Mart” by friends, they have been employed by the retailer for more than 10 years. They love their jobs, said daughter Pattie Phillips.

“What am I gonna do if I don’t work?” asked the silver-haired Mr. Cohen. Although his wife works 15 hours less than his 40, they make their schedules mesh. He finds her in the store aisles sometimes to say hello, and she sometimes accuses him of flirting with female customers.

On Tuesdays, their day off, they visit a senior center for lunch and fellowship, work in the yard, dine out and play bingo at the Gamber Fire Hall. The brown-eyed Mrs. Cohen enjoys preparing Italian and Jewish meals, and she attends Mass weekly with their daughter.

Mrs. Phillips, 54, is one of two children in the Cohen family; her brother, David Cohen, 59, is an involved parishioner of St. Joseph as a teacher of religious education.

The Cohens are very family-oriented, according to Mrs. Phillips, a public-school teacher. “We don’t go without a family party for any occasion. That’s what our parents have instilled in us – family.”

About her parents, she said, “They can’t be without each other.”