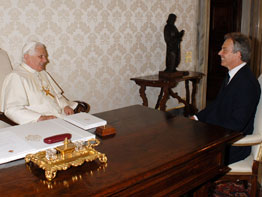 LONDON – Former British Prime Minister Tony Blair has spoken of his “passionate” conviction that religious faith can transform humanity for the better.

Mr. Blair, 54, a former Anglican who was received into the Catholic Church just days before Christmas, said he wanted to promote the “idea of faith itself as something dynamic, modern and full of present relevance.”

He told 1,600 people gathered in London’s Westminster Cathedral April 3 that faith had a “major part to play in shaping the values which guide the modern world and can and should be a force for progress.”

“But it has to be rescued on the one hand from the extremist and exclusionary tendency within religion today and on the other from the danger that religious faith is seen as an interesting part of history and tradition, but with nothing to say about the contemporary human condition,” he said. “I see faith and reason, faith and progress, as in alliance, not contention.”

His remarks came in a lecture on the subject of “Faith and Globalization,” the first in a series of six speeches hosted by the Archdiocese of Westminster on “Faith and Life in Britain.”

Mr. Blair, now the Middle East peace envoy for the quartet of the United States, the United Nations, the European Union and Russia, said that many British people shared the notion that “religion is divisive, irrational and harmful.”

“For years it was assumed that as humanity progressed intellectually and matured morally, so religion would decline,” he said.

“But in fact at no time since the Enlightenment has religion ever gone away,” he said. “It has always been at the very core of life for millions of people, the foundation of their existence, the motive for their behavior, the thing which gives sense to their lives.”

Faith is not in decline, he added: “It isn’t disappearing inevitably under the weight of scientific and technological progress. It is still here with us, not just surviving but thriving.”

He said that since leaving office as prime minister in June, he had become more acutely aware of the dynamics of globalization, and he said that it was in this context that the role of faith was especially important.

He said that the world’s religion could transform and humanize impersonal forces of globalization and shape the values of changing economic and political relationships of the early 21st century.

He said that power was shifting rapidly from the West to the emerging superpowers of China and India, and the role of faith was vital in the struggle for a world of peaceful coexistence.

Mr. Blair said the world “will be immeasurably poorer, more dangerous, more fragile and above all, more aimless” without a spiritual dimension.

“Today is more than ever when we need to discover and rediscover our essential humility before God, our dignity as found in our lives being placed at the service of the source and goal of everything,” Mr. Blair said.

“I can’t prove that religious faith offers something more than humanism, but I believe profoundly that it does,” he added. “And since religious faith has such a strong historical and cultural influence on both East and West, it can help unify around common values what otherwise might be a battle for domination.

Mr. Blair said he would commit himself to the cause of interfaith dialogue through the Tony Mr. Blair Faith Foundation, which he will establish in London this summer.

He said he hoped the foundation would bring together different Christians, Muslims, Jews, Sikhs, Hindus and Buddhists in working to alleviate global poverty by urging governments to meet the U.N. Millennium Development Goals. These have the aim of halving the rates of world poverty – defined by the numbers of people existing on less than a dollar day – by 2015. But he said the “broader objective” of his foundation would be to help more people to realize religion as a “positive force for good.”

“Faith is not an historical relic but a guide for humanity on its path to the future,” Mr. Blair said. “A faithless world is not one in which we want ourselves and our children to live.”

“If people of different faiths can coexist happily, in mutual respect and solidarity, so can our world,” he said.

Mr. Blair has accepted a post at Yale University in New Haven, Conn., and will give seminars on faith and globalization, in which he will focus on how religion can be used to further international relations.

While he spoke, hundreds of protesters from the Stop the War Coalition, which held Mr. Blair responsible for taking Britain into the war in Iraq, tried to drown out his words with a “wall of sound” outside. They used musical instruments, whistles, pans and alarms to make as much noise as possible. Some stood beneath the windows of the cathedral and howled at the tops of their voices.

Before the lecture, Pax Christi U.K., the Catholic peace movement, held a silent prayer vigil on the square in front of the cathedral. Some of its members dressed in sackcloth and wore ashes and held banners quoting remarks made by Pope Benedict XVI and Pope John Paul II against war.

Bruce Kent, a former Catholic priest from London who joined the vigil, told Catholic News Service that he was protesting because “Mr. Blair launched an illegal war on false pretenses in violation of the U.N. charter.”

“I don’t think he has a good enough track record to be preaching on faith and globalization,” Mr. Kent said.