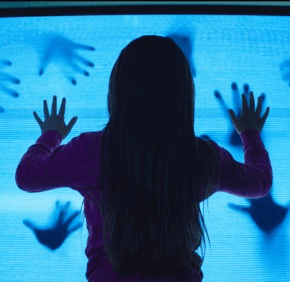 NEW YORK – Hollywood’s preoccupation with remakes continues with “Poltergeist” (Fox), a reimagining of the 1982 horror film that gave new meaning to the term “haunted house.”

This time, a trio of producers (Sam Raimi, Rob Tapert and Roy Lee) takes over from Steven Spielberg. Along with a new director, Gil Kenan (“Monster House”), they offer a 3-D take on the “ordinary” family suddenly caught in an otherworldly trap.

The result is a sometimes scary but mostly silly tale of suburbia under siege, suitable for mature viewers only.

The Bowen family is the picture of dysfunction. Dad Eric (Sam Rockwell) has lost his job. Mom Amy (Rosemarie DeWitt) is distracted and unfulfilled.

Then there are the kids. Kendra (Saxon Sharbino) is an obnoxious teen. Sensitive Griffin (Kyle Catlett) is afraid of the dark. And 6-year-old Madison (Kennedi Clements), cute as a button, talks incessantly to her imaginary friends.

The family, forced to downsize, moves into a new home on the edge of town. Problem is, the neighborhood was built atop an old cemetery.

Seems the real estate agent neglected to mention that fact.

Before long, things go bump in the night. “Poltergeist” largely follows the plot of the original film, with Madison talking to the television set, announcing, “They’re here.”

“They” are the spirits of the film’s title. Think really, really angry ghosts who make a really big mess and soon invite Madison to join them inside the closet.

Riding to the rescue is Carrigan Burke (Jared Harris), a goofy paranormal expert turned TV personality. Along with his ex-wife, Dr. Claire Powell (Jane Adams), a hand drill, and a whole lotta rope, Burke steps into the breach before it’s too late.

Needless to say, as the mayhem mounts, the house’s resale value plummets.

The film contains scenes of supernatural horror and child peril, and fleeting crude and profane language. The Catholic News Service classification is A-III — adults. The Motion Picture Association of America rating is PG-13 — parents strongly cautioned. Some material may be inappropriate for children under 13.