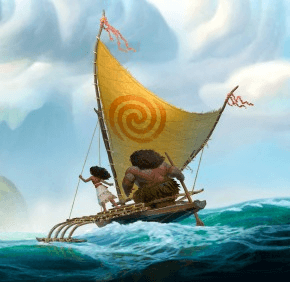 By Joseph McAleer
Catholic News Service
NEW YORK – The same tropical setting that provided the backdrop for the 1949 musical “South Pacific” now lends its exotic flavor to the animated feature “Moana” (Disney).
As for the feminism-friendly story of the movie’s eponymous heroine, well, as Rodgers and Hammerstein’s lovelorn Seabees so famously declared, “There is nothing like a dame.”
The spunky heroine of Disney’s 56th animated film is a 16-year-old Polynesian princess (voice of Auli’i Cravalho) who seeks not a boyfriend but a grand adventure on the high seas, all to save her world from destruction.
There’s no mistaking the entertainment value of “Moana,” gloriously rendered in 3-D, with a delightful array of characters and toe-tapping songs co-written by Lin-Manuel Miranda of Broadway’s “Hamilton.” The film also offers good lessons about family, friendship and the need to be responsible.
But Christian parents may be concerned to find that Jared Bush’s screenplay is steeped in indigenous mythology. “Moana” presents a view of creation at odds with the biblical account, and could confuse impressionable minds. Well-catechized teens, however, will likely slough these elements off as mere fantasy.
As “Moana” tells it, in the beginning was not God but a comely goddess named Te Fiti, who commanded the oceans and brought life to the world.
Te Fiti was joined by a demigod (half -god, half-human) named Maui (voice of Dwayne Johnson). Maui had a nifty talent of pulling islands up from the sea with his trusty fishhook. But he was greedy, and stole the magical “heart” of Te Fiti. Darkness covered the world, and Maui was banished.
Fast-forward several centuries to the tranquil island of the so-called “Chosen One,” Moana. Since her name means “ocean,” it’s no wonder that Moana is drawn to the open waters beyond her island’s protective reef, despite the warnings of her father, Chief Tui (voiced by Temuera Morrison).
“No one goes beyond the reef,” he says. “It keeps us safe.”
But the ocean has a mind of its own, and — in a manner strikingly similar to the animated column of water in 1989’s “The Abyss” — the sea pokes and prods Moana into seeking her destiny. Her quest is to locate Maui, transport him across the sea (demigods don’t swim), and restore Te Fiti’s heart before the encroaching darkness reaches Moana’s island.
Maui is more surfer dude than classical Greek god. He’s also accustomed to adulation, not the commands of a teenager. The tattoos covering his ample girth spring to life, acting either as a voice of approval or an admonishing, Jiminy Cricket-like conscience.
Throw into the mix Moana’s pet, a dimwitted rooster named Heihei (voice of Alan Tudyk), and you have the recipe for a chaotic but amusing journey across the sea.
With previous helming credits like “The Little Mermaid” and “Aladdin,” co-directors Ron Clements and John Musker represent the aristocracy of Disney animation. Yet “Moana” does feel derivative at times, with echoes of previous films. And storm sequences as well as creature battles may be too intense for younger viewers.
Preceding “Moana” is an amusing animated short called “Inner Workings.” A riff on last year’s “Inside Out”, it tells the story of a man stuck in a dead-end job in the firm of “Boring, Boring, and Glum.” When he imagines doing crazy, potentially risky things like surfing, his brain works overtime to keep him safe, lest he wind up dead (depicted by his gravesite, with a Latin-chanting priest offering a blessing.)
The film contains nonscriptural religious ideas, mildly scary action sequences and occasional bathroom humor. The Catholic News Service classification is A-II– adults and adolescents. The Motion Picture Association of America rating is PG — parental guidance suggested. Some material may not be suitable for children.
Copyright ©2016 Catholic News Service/U.S. Conference of Catholic Bishops.
To see more movie reviews, click here
PrevNext