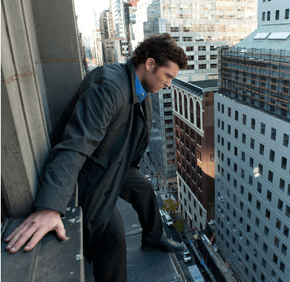 NEW YORK (CNS) — When an ex-cop is falsely convicted of stealing a multimillion-dollar diamond and sentenced to 25 years in jail, there’s just one course for him to follow: Break out of prison, check in to Manhattan’s landmark Roosevelt Hotel, order lobster — then clamber out onto a cornice hundreds of feet above street level.

Such, apparently, is the logic of Nick Cassidy (Sam Worthington), the protagonist of the tedious thriller “Man on a Ledge” (Summit).

Sent up the river for stealing the fabulously valuable Monarch Diamond from morally stained, cigar-smoking moneybags David Englander (Ed Harris), Nick settles on a convoluted plan to vindicate his innocence. While he distracts a crowd of New Yorkers from his high-story perch, his brother, Joey (Jamie Bell), and Joey’s girlfriend, Angie (Genesis Rodriguez), will crack open Englander’s vault and prove that the putatively purloined jewel is still in situ.

Worthington’s character is thus left in the bizarre — and soon tiresome — circumstance of spending over half the movie cavorting on that precipice, whence disgraced police negotiator Lydia Mercer (Elizabeth Banks) tries to coo him down.

Mercer is supposedly depressed at her recent failure to prevent a fellow cop from hurling himself to his death. But her habitual growls and grunts come across as little more than crabbiness.

The movie as a whole aims for cynical edginess, with results as unconvincing as they are unpleasant. Screenwriter Pablo F. Fenjves infuses his risibly bad dialogue with an unusually high amount of profanity. These assaults on the Lord’s name reach a crescendo in a scene where the Second Commandment is violated a trio of times in less than 30 seconds.

So feebly cardboard are the perpetrators of this verbal sacrilege, though, that they are more likely to rouse impatience than ire.

Along with would-be remorse maven Mercer, there’s stereotypically hard-edged Latina Angie. She pouts a lot and, so we’re told, used to burgle houses during what was presumably a challenging youth spent on the mean streets of Anybarrio, U.S.A.

What Angie lacks in depth she makes up for on the surface by serving as all-too-obvious eye candy. When the break-in requires her to shimmy down a vent, she prepares herself by undressing down to her frilly unmentionables (seen in close-up, of course) and squeezes herself into a skintight, Catwomanesque one-piece.

The one flicker of light comes from that stogy of Englander’s as Harris illumines the screen whenever he’s on it. Unfortunately, his appearances are far too short to prevent “Man on a Ledge” from taking a suicide leap into the depths of mediocrity.

The film contains occasional action violence, an implied premarital situation, much profanity, at least two uses of the F-word and considerable crude and crass language. The Catholic News Service classification is A-III — adults. The Motion Picture Association of America rating is PG-13 — parents strongly cautioned. Some material may be inappropriate for children under 13.

Shaw is a guest reviewer for Catholic News Service.