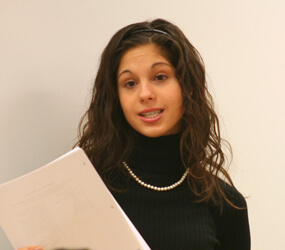 DiNunzio, a student at Mount St. Mary’s University in Emmitsburg, worked for Ditch, the director of recreational services at the school, for three years. The petite DiNunzio did clerical work around the office, and Ditch saw the student explore passions in her life, like teaching Spanish and running.

“She was always very pleasant and had a beautiful smile,” Ditch said of DiNunzio. “We got to see her through her various ups and downs in life, when she had a bad time in class or when she was stressing out over a paper.”

DiNunzio had blossomed into a woman.

That’s why April 28 of this year stung so much for Ditch and thousands in the Mount community.

DiNunzio was running and preparing for the Pittsburgh Marathon on the side of Old Emmitsburg Road near the school’s campus when she was struck and killed by a truck.

DiNunzio was running against traffic and had taken all the proper precautions.

Word quickly spread on campus that a student had been hit, and possibly killed. When Ditch’s office found out that it was DiNunzio, people were in shock.

The 22-year-old was just days away from the marathon, which was taking place in her hometown, and weeks from graduation.

“We were in total disbelief,” Ditch said. “We thought, ‘how could this have happened?’ ”

Ditch said there was a somber mood on campus in the days that followed.

“Everyone was in total disbelief,” Ditch said. “It could have happened to any one of us.”

Mount St. Mary’s community members have endured several student deaths over the years. Just like in those cases, the Mount family pulled together.

There is a movement, which Ditch’s office is a part of, to turn the grief and pain into something positive.

Mount St. Mary’s has been talking about building a trail on the east side of the school’s campus. The goal is to give runners and other active people a safe place, away from speeding cars.

A major road block to the potential trail exists, however. The trail, which could cost hundreds of thousands of dollars, was not a part of any previous budget and the school is in the middle of a capital campaign. Ditch said the payments for the trail would be in phases.

Marla Streb, a Mount alum, runs a trail-building company with her husband and did a site analysis. Tweaks are being done to proposals to bring the trail closer to a reality.

Ditch said there’s a “very good chance” it could be named after DiNunzio if budgeting issues are figured out.

“I certainly would love to see it,” Ditch said. “I think if the trail is built, it will be (DiNunzio’s) legacy.”