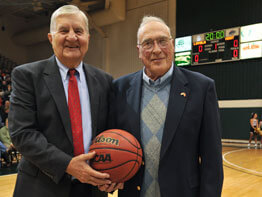 Overlooked is the fact that Phelan spent another 16 years being educated at Catholic institutions. From a parish school in South Philadelphia to the Catoctin Mountains, he spent 65 years on campuses affiliated with the church.

Phelan, who on Nov. 23 is to be enshrined in the National Collegiate Basketball Hall of Fame in Kansas City, Mo., connects some remarkable dots as he reminisces. It seems the older the anecdote the better, whether the topic is his 830 wins, the NCAA College Division title the Mountaineers won in 1962, or his trademark bowtie.

Phelan, 79, was a child of the Great Depression who sneaked into the massive bowl then known as Municipal Stadium in Philadelphia for Army-Navy football games. His youth revolved around St. Monica parish at 17th and Ritner, where he first discovered the City of Brotherly Love’s passion for basketball.

“St. Monica had to be the only parish team to have two kids who would play pro basketball,” Phelan said. “Paul Arizin (named one of the 50 greatest players in NBA history) was in the eighth grade when I was in the seventh, but our team went nowhere.

“Basketball was a rough and tumble game at the parish level, and I learned how to play a little bit scared. That’s also where I learned about loyalty.”

Phelan remained in Philadelphia, playing for La Salle College High School and then La Salle University. After a stint in the U.S. Marine Corps and a brief fling with professional basketball, he took the coaching job at Mount St. Mary’s in 1954.

Along with his wife, Dottie, Phelan became part of the Emmitsburg fabric – at both the college and at St. Joseph parish, where an early encounter with a familiar priest reaffirmed the values taught at home.

“Father Joe O’Donnell was working at Niagara (University) when I thought I might go there out of high school,” Phelan said. “When I show up in Emmitsburg, where is he working, but St. Joseph College, the old women’s school here.

“Father O’Donnell said ‘you’re the only (Niagara) recruit who ever turned us down who sent back the $50 for travel we gave out.’ My mother Lily made me do that.”

Jim and Dottie’s five adult children remember a steady stream of priests through their home, including Father James Delaney, whom Phelan the athletic director hired to start a women’s team in 1974, after the Mount went co-ed.

“One rainy night Father Jim came knocking on the door,” Phelan said. “He said, ‘if I wanted this much trouble with women, I would’ve gotten married.’”

That first women’s team included a daughter, Lynne Phelan Robinson, who is now the athletic director at Mount St. Mary’s.

“So many priests were part of our lives,” she said, “we just took it for granted.”

Even with Lynne’s daughter Kate off playing basketball for the Catholic University of America, a sizable Phelan contingent will be in Kansas City for the Hall of Fame induction, where names like Charles Barkley and Dick Vitale will also be honored.

In retirement, Phelan dotes on his 10 grandchildren, including being an assistant coach for his son Bobby in youth games. When that tradition began, granddaughter Molly, now 11, would come out of games for a break and plop on the lap of “Pop Coach.”

Father Vincent J. O’Malley, the Vincentian pastor of St. Joseph in Emmitsburg, notes the affection given Molly’s baby brother, Lucas James, a 2-year-old who has Down syndrome.

“Thank God he’s in the Phelan family, Lucas James receives endless love,” Father O’Malley said. “Jim and his wife Dottie are people of very strong faith, who passed that on to their children.

“Jim provides a wonderful role model for everyone in our parish. He took the talents God gave him and developed them to their fullest.”