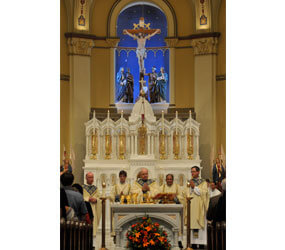 EMMITSBURG – Mount St. Mary’s University held a housewarming of glorious proportions Sept. 13 for its historic, newly restored Chapel of the Immaculate Conception, the acknowledged heart of its seminary and college community.

A rededication Mass, celebrated by Archbishop Edwin F. O’Brien, apostolic administrator of the Archdiocese of Baltimore, and 55 co-celebrants brought alumni, seminarians, students and staff to the chapel.

“This is one of the most significant plots of ground in the archdiocese,” Archbishop O’Brien said. “What this chapel has meant to so many people coming here, where they have had that encounter with the living Christ, has been deeply rooted on this historic ‘Mary’s Mountain.’ ”

The chapel, known to students and seminarians as the IC Chapel, was built in 1910, more than a century after Father John DuBois had founded the Mount in 1808. It is the second-oldest Catholic college in the United States, after Georgetown University in Washington, D.C.

The four-year long restoration, which took place during summers, when the chapel was closed, included a new roof, organ, lighting and sound systems; a newly designed marble floor; cleaning and painting of the chapel, shrines and Stations of the Cross; and restored pews.

Known to both seminarians and students for its beauty and source of devotional inspiration, the chapel has been home to many solemn moments, from alumni and students’ weddings to seminarians’ first homilies.

“It’s a place where seminarians and students have very fond memories,” said Monsignor Stephen P. Rohlfs, vice president and rector of the Seminary. “Many seminarians have some of their prime prayer experiences take place in that chapel; if they pray for discernment, often they receive their answer there.”

Lafayette (Ind.) Bishop Timothy L. Doherty travelled to Mount Saint Mary’s for the Mass out of curiosity and a sense of welcoming for seven Mount seminarians who will serve his archdiocese.

“My diocese of origin is in Illinois, and I had a lot of priests who came from the Mount,” Bishop Doherty said. “Now I have seven men coming to me, so I had to take this chance to see what is special about this seminary.”

Restoration of the chapel strengthens the Mount’s Catholic identity.

“The chapel speaks to two of our four pillars, faith and community,” said Monsignor Stuart Swetland, vice president for Catholic Identity and Mission at the Mount. “It is where we celebrate our faith, which transcends place; but as a place, it is a symbol of that centrality of faith in our campus community.”

Masses take place three times daily in the IC Chapel; a second Sunday evening Mass has been added, due to the Mount’s largest freshman class ever. Students sense the glory the restoration has brought to the worship space.

“The IC was always a beautiful building before, but now as you enter the chapel and the lights are on, you can’t help but be in awe and inspired to drop to your knees and pray,” senior Christopher Wild said in a news release from the Mount.

Archbishop O’Brien said that restoring the chapel was symbolic of the Mount’s commitment to being a Catholic college, noting that society and other colleges have compromised traditions and morals.

“At last,” he said, “some Catholic universities and seminaries have welcomed the restoration of the church as Mount St. Mary’s did, and continues to do, in its unapologetic embrace of Catholic identity.”

Raising funds for the project during a time of economic stress was a challenge, said Thomas Powell, the university’s president.

“The miracle is,” he said, “we were able to raise the money and complete the renovations in the worst economic times since the Great Depression.”

A large portion of the $2.5 million came from the Monsignor Kenneth W. Roeltgen Foundation. Monsignor Roeltgen, a priest of the Archdiocese of Washington who served as rector of the Mount Seminary from 1988 to 1997, died in 2002.

Dennis Doyle, Class of 1963, past trustee and donor to the project, said his contribution to the renovation stirred fond memories.

“I have been in that chapel many times over the years,” the Timonium resident said. “It is the heart of the Mount.”