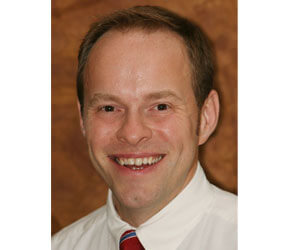 “He is well known around the Mount for his impersonations of teachers and during his spare time, you can most likely find him at the race track.”

That is the description of senior Larry Collmus in the 1984 Mount St. Joseph yearbook.

Twenty-seven years later, he’s still using his voice and he’s still at the track. Collmus became the voice of horseracing’s Triple Crown of races – the Kentucky Derby, the Preakness Stakes and the Belmont Stakes – in April when longtime announcer Tom Durkin retired.

An NBC television producer called Collmus, 44, while he was in the announcer’s booth at Gulfstream Park in Florida.

“I thought it was a friend playing a joke on me,” Collmus said.

He called horseracing’s marquee race, the Kentucky Derby, May 7. When the Ellicott City native walks into Baltimore’s Pimlico Park May 21 for the Preakness, he will see old friends instrumental to his meteoric rise.

Collmus was a parishioner of St. Paul’s in old Ellicott City and attended Trinity School through eighth grade. Catholic schools were key, he said.

“I was very lucky to get that education from Trinity and Mount St. Joe,” he said. “The friendships I developed over the years have remained. They teach guys how to act and be good people. That’s what I try to do.”

As a teen, Collmus worked for his father’s business, which did sound work for the state’s tracks.

“I was just really fascinated with everything,” Collmus said. “It was watching the horses, seeing the many different characters at the tracks and the whole atmosphere. I thought, ‘This is for me.’ ”

Around the age of 15, he attended his first Preakness, sitting in old grandstand seats that admittedly weren’t great. It didn’t matter.

“To see the horses that just ran in the Kentucky Derby was incredible,” Collmus said.

Collmus watched ESPN specials that recapped the week’s races and impersonated the broadcast calls. Those impressions carried over to the state’s race tracks, where he had begun working as a ‘gopher’ in the press boxes.

One official noticed and asked, “You do all these impressions. Why don’t you do this for real?”

So, Collmus took a pair of binoculars and a tape recorder to practice calling live races. After just a semester at Baltimore’s Loyola University Maryland, he withdrew thanks to a job offer to call the state’s races.

Like a thoroughbred at the starting gate, Collmus was ready for a fast ride.

“This was the opportunity I was waiting for,” Collmus said.

By the time Collmus was 20, his career took him to Birmingham, Ala. And later San Francisco, Boston, New York and Florida.

After he was hired to call the Triple Crown, Mount St. Joseph classmate Jim Schwartz, head coach of the NFL’s Detroit Lions, reached out to congratulate him. The school’s current president, Xaverian Brother James Kelly, wrote a letter as well.

Having watched the Kentucky Derby throughout his life, Collmus always got chills hearing and seeing thousands of people singing “My Old Kentucky Home.”

Collmus’ call of Animal Kingdom’s victory went off without a hitch. He now will try to keep his emotions in check during his return to Baltimore. He still can’t believe he’s calling the Triple Crown.

“I hope it’s a long-term deal,” he said laughing.

California Chrome is pictured with his jockey at the Kentucky Derby May 3. 1984 Mount St. Joseph grad Larry Collmus, the announcer for the Belmont Stakes, will inform viewers from around the country if California Chrome has won the Triple Crown June 7. (Photo via Flickr, Bill Brine)
PrevNext