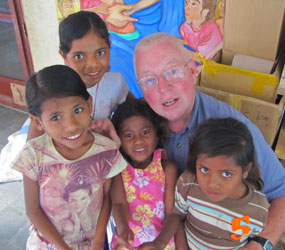 Thomas and Irene Powell never thought they would be parents again at the age of 58 and 57 respectively. The couple has three grown children and grandchildren, and Thomas is busy as president of bustling Mount St. Mary’s University in Emmitsburg.

But a December 2010 trip to East Timor has them moving toward adopting multiple children from the impoverished Asian country. The couple hopes to finalize adoption of school-aged children via Catholic Charities this summer.

“If we know or see someone in need, we just can’t help ourselves,” Irene Powell said. “We have to help.”

“If you get called to do something, ‘no’ is not an option,” added Thomas.

The Powells previously adopted their eldest son, Nick, who has autism. His addition to their family years ago was “a blessing.”

Their daughter Cate and her husband, Mark Johnson, adopted 15-year-old Deta, three years ago from East Timor. The Johnsons became the first Americans to adopt an East Timor child and are hoping to adopt their daughter’s best friend as well.

East Timor became a sovereign state in 2002 after a long, bloody struggle with Indonesia.

“It was probably one of the most horrific wars on our planet,” Thomas said. “The people were living in absolute terror.”

Fifty percent of the children in largely-Catholic East Timor are malnourished.

The Powells went to East Timor and visited Topu Honis, a living space and education center for about 120 children, which is run by Divine Word Missionary Father Richard Daschbach. The priest’s brother, Father Edward Daschbach, is also a Divine Word Missionary and served as pastor of a church near West Virginia’s Glenville State College, where Thomas Powell once served as president.

“Most of the people of East Timor have declared him a saint,” Thomas said.

When the Powells announced their trip, the Mount St. Mary’s community rallied.

The Mount’s Marketing Club presented a check for more than $5,000 to the Powells for Topu Honis. The students raised the money by collecting trash in student living areas.

Marketing Club member Tyler Jones said in a statement: “From a marketing standpoint, we were launching a new brand; no one knew what Topu Honis was or much about its location in East Timor. Once we started connecting with other offices and organizations on campus, the brand began spreading and after a few simple meetings we were able to get the seminary, the Center for Student Diversity, the Office of Community Service, the School of Business, and the Center for Campus Ministry connected.”

Thanks to money also raised by Mount St. Mary’s seminary, the Powells took more than $6,700 to Topu Honis.

The Powells witnessed East Timor people walking miles through trails and paths just to be at Christmas Eve Mass.

“I think this is something all us Catholics,” Thomas said. “You see the universality of our church. These are people who are absolutely dedicated to the Catholic faith. How many of us are going to walk 12 miles to go mass?”

Father Daschbach translated Mass and songs into words understandable to the natives, who don’t have a written language.

“In the dark of the jungle, all these people were singing Silent Night,” Irene said. “It was absolutely incredible.”

The Powells are hoping to raise the $20,000 desperately needed to build new dormitories for Topu Hunis.

“We know we can’t save everybody, but we happen to know these kids and think we can help,” he said.