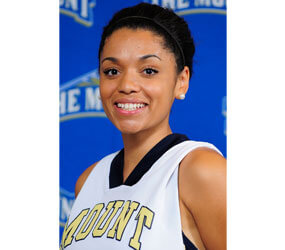 Growing up in Ireland, Leah Westbrooks saw television programs about the struggles of African children. She felt for the impoverished, sick young people looking back at her through the screen, and wanted to help.

“My heart has always been with the continent,” she said with a lilting brogue.

Westbrooks, a recent graduate of Mount St. Mary’s University in Emmitsburg, where she played basketball, more than got her wish this summer. She is currently in Africa, leading projects with organizations called Shooting Touch and the Matilda Project.

Shooting Touch is a Boston-based operation that uses basketball as a platform to orchestrate social change through mentorship and education, while Ireland-based Matilda Project works with people who have AIDS in Zimbabwe.

She received news earlier this year that she had received a $25,000 sabbatical grant from Shooting Touch, making her dream a reality.

She will be in Africa 10 months, starting with Cape Town, South Africa, during the first four months.

“If I didn’t get this grant, I was coming home to Ireland to work for the year and save as much as I can so I could go over and support myself and to volunteer with the Matilda Project,” Westbrooks said. “That’s always been my heart. This grant has just been a huge blessing.”

Westbrooks did indeed return home after graduating from the Mount this past May, but her stay was short as she left for Africa in late June. Before departure, she was unapologetically idealistic.

“I might be going into this with lofty ideas,” Westbrooks said. “I think it’s going to smack me in the face and show me a reality that this is these people’s reality and their despair.”

She first learned about Shooting Touch’s grant to serve anywhere in the world through Mount’s women’s basketball coach Bryan Whitten. Westbrooks was intrigued by the idea of sharing her love of basketball in a mentorship capacity.

She applied in December 2010 and a month later heard that she had made the top five. She made a YouTube video explaining who she was and what she would do with the grant money. By mid-February, she received a call telling her that she was the winner.

“I was freaking out when I heard I won,” Westbrooks said.

While in South Africa, she is using basketball leagues to raise self-esteem and team-building awareness amongst Cape Town children. It’s a sport she has loved since in an early age, as her father is an American who played basketball professionally in Ireland.

As she volunteers with Matilda, she will be working with people dying of AIDS and aim to make the final days of their lives peaceful through home-based care.

“I’m preparing my heart for it because when I talk about it, I get emotional,” Westbrooks said.

Westbrooks said that she was able to do service work, even while playing basketball at Mount St. Mary’s. She said the school goes beyond its rural setting to help others.

“If ever there was a place with such big hearts, it’s the Mount,” Westbrooks said. “From the faculty and staff to the students, they’re about giving back to the wider community. Often in college, you can get stuck in your own bubble, but not there.”

Westbrooks plans to play professional basketball in the future, but doesn’t know if she will extend her time in Africa or return to Ireland or the U.S.

“Who knows where I’ll be? It’s all part of the adventure,” she said playfully.

For now, Westbrooks’ focus is helping people young and old in Africa. She views it as a life-changing gift.

“I have the opportunity to bring joy in their lives and hope, even if it’s one kid or two,” she said. “I am sure during the next 10 months I’m going to be questioning God, ‘Why is this their reality?’ I know this is what I’m supposed to be doing. God’s my strength and he’s got my back. I’ll be OK.”