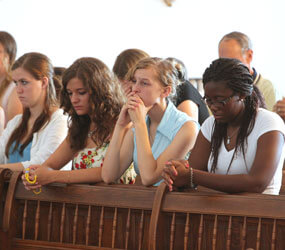 Emily Kerstetter, a rising junior at Mount de Sales Academy, faces an uphill struggle as she recovers from injuries sustained in a July 11 bombing in Uganda.

The attack, which occurred as people gathered during the end of the World Cup soccer tournament, took more than 70 lives.

Her uncle, Randy Becker, said that Kerstetter had extensive wounds on her lower extremities and is in a hospital in Johannesburg, South Africa.

Kersetter, a member of Ilchester’s Our Lady of Perpetual Help, was on a mission trip with her grandmother and members of a Methodist church from Pennsylvania. Kerstetter had surgery July 13 that went “very well,” according to Becker.

“She’s going to have to have multiple other surgeries,” Becker said. “With the support of the school, her family and friends, we’re going to get through this.”

Becker said Kerstetter and her grandmother were awake and alert.

The grandmother regularly served in Africa and her selflessness inspired Kerstetter.

Many from the Mount de Sales community and her parish gathered July 14 for a prayer service at the all-girls school in Catonsville. The chapel, side chapel and choir loft overflowed with supporters.

“There is a comfort in praying and coming before the Lord, but we know in faith that he really does hear the prayers that we offer,” Father Arnold said in his message. “It is good for us to be here today to pray for Emily, to pray for all those who were involved in the bombing.”

Father Arnold said the violence in Uganda was a painful reminder of how important the mission work is to stability.

‘The world needs to see in action, and in our words, genuine, authentic love,” he said. “We need to see the love of Christ Jesus made real in order that our hearts might be won over to that love. That’s the beautiful role missionaries play.”

Father Arnold shared a letter written to him by Kerstetter two years ago, when she was a student at the parish school.

She wrote about loving everyone, including enemies.

“Although we constantly sin against him, he always forgives us. It is hard for people to forgive one another because as humans we are defensive beings,” she wrote. “For me, it is hard to forgive people, but I have to put myself in their shoes and if I were them, I would want to be forgiven. In the world, people are very unforgiving. I can’t even imagine how painful it is for God to see the grudges we hold.”

Father Arnold said Kerstetter and fellow victims now face a challenge to live up to her words.

“We also want to pray,” he said, “for the deepest part of their hearts that what they’ve been through will not set them against the world, that would not make them bitter to this world.

“But,” Father Arnold continued, “rather they will be so filled up with the love of Christ that their witness of being able to forgive… might convert us and win us over even more deeply to the Lord Jesus. This is what the world needs. Emily is an amazing place to try and do that in what is certainly one of the most difficult ways.”

More on this story will appear in the July 22 edition of The Catholic Review.