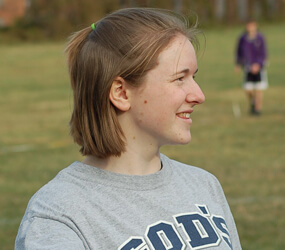 The Mount de Sales Academy community is mourning the loss of Amy Adams, a 2006 alumna.

Adams, 20, died May 3 after accidentally falling the previous day in Salt Fork State Park in Ohio, where she was a junior at Muskingum College.

“Amy was very diligent in everything she did,” said Dominican Sister Elizabeth Anne Allen, principal of the Catonsville high school, “smart, quick, really involved in whatever she was giving her attention to at the moment.”

She described Adams as a very generous spirit who brought out the best in others and never called attention to herself.

“She had an unusual sensitivity for the dignity of each person. She was friends with everyone. She was kind to everyone,” said Sister Elizabeth Anne, who taught Adams’ senior religion class. “Nobody could ever remember her saying a bad word about anyone or ever losing her patience.”

“When we did physical testing – I believe it was the fifth or sixth grade – she did 39 pull-ups,” said Williams, who taught at the Catonsville elementary school. “I think I was more tired counting than she was doing the pull-ups.”

He believes it may still be a school record.

Williams said Adams showed that same sense of determination on Mount de Sales’ track and field team, for which she threw the shot put and the discus.

In the last meet of her senior year, Adams met her personal goal of throwing the discus 100 feet, said Williams, who was her track and field coach. Although the throw didn’t count because it was a foul, he said, that didn’t keep Adams down.

“She was just as happy to know in her heart that she had broken a goal she had set for herself,” Williams said, “that it didn’t matter if anybody else knew it or not.”

An asset to the Mount de Sales track and field team, Adams was a peer coach in the throwing events, taking it upon herself to teach others, according to Williams. She was an Athlete of the Week in a May 2006 issue of The Catholic Review.

Sister Elizabeth Anne said some of Adams’ classmates are planning an event this summer to honor Adams’ memory.