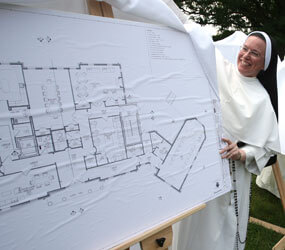 CATONSVILLE – At a time when convents are shuttering across the country, leaders of Mount de Sales Academy in Catonsville announced plans June 4 for a new convent that will house the Dominican Sisters of St. Cecilia who work in the all-girls school.

“I think it’s a sign of hope, not just for Mount de Sales, but for the whole archdiocese that religious life is alive and well,” said Dominican Sister Anne Catherine Burleigh, principal.

Father Michael Roach, pastor of St. Bartholomew in Manchester and former president of the school’s board of trustees, sprinkled holy water on the grounds where the two-story building will stand.

The convent will cost $2 million, including $1.5 million for construction and $500,000 for a maintenance endowment. More than $1 million has already been raised.

Sister Anne Catherine said the convent will include a chapel, a community room, a work room and sleeping quarters. It will accommodate 12 sisters. Next year, five sisters will be working in the school and two others will live with the community as they continue their studies at Loyola University Maryland in Baltimore.

The building is expected to be finished in early spring of 2011.

In conjunction with the new building, the school plans campus security upgrades and the installation of a new air conditioning system for its main building. The improvements are part of the first phase of a three-phase effort that will eventually include a new athletic field with hillside seating and a performing arts building.

To pay for the projects, the school launched a $15.5 million capital campaign called “Anchored in Excellence; Charting our Future.”