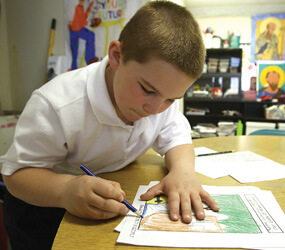 Michael Lyons loves drawing pictures so much he wants to be an artist someday.

“I like moving my hand around and seeing what it makes,” the third-grader at Our Lady of Mount Carmel Elementary School said during a recent art class at the Essex school. “Sometimes I just think it out and sometimes I just trace what’s in my head.”

Baltimoreans will see what has been brewing inside the minds of Michael and his schoolmates when their illuminated manuscripts are displayed April 7-19 at the Walters Art Museum in an exhibit called, “Children Lighting the Way: Illuminated Manuscripts.”

Illuminated manuscripts illustrate Bible passages, giving visual representation of the written word. Students at Mount Carmel, St. Michael’s Academy Home School Co-op in Woodstock and St. Michael’s School in southern Maryland each have produced their own interpretations of the Bible.

Mount Carmel worked on the Gospels of Luke and Matthew. Some students will be taken to the opening of the display at the Baltimore gallery April 7 and tour other exhibits, including the Saint John’s Bible.

The students’ art exhibit coincides with the current display of the Saint John’s Bible, which is hand-written and features 49 manuscripts of modern imagery. It has been available for viewing at the Walters since February and will conclude May 24.

The idea for the student art came through the collaboration of sisters Margaret Zelhoffer and Carol Morris. Mrs. Zelhoffer is the art instructor at Mount Carmel, while Mrs. Morris teaches at St. Michael’s Academy.

“It’s about the Bible being for the 21st century,” Mrs. Zelhoffer said. “How does it apply to us?”

Mrs. Morris previously attended a lecture about the Saint John’s Bible and became excited, prompting her to talk with her sister. When the Walters announced the Saint John Bible would be coming to Baltimore, they wrote the museum’s director to see if he was interested in student-produced artwork.

Mount Carmel had previously worked on a well-received icon exhibit for the Walters.

“They invited us back and were very excited,” Mrs. Zelhoffer said.

Students worked on various pieces of the art, including practicing calligraphy, over a six-week period. They were given Bible verses and encouraged to illustrate them through modern eyes. Much of the work was done with colored pencils.

“It’s such an array,” Mrs. Zelhoffer said. “You can have people looking like they are in Egyptian clothing and then you have something from today.”

Students envisioned Jesus being abused by Taser rather than whip on his walk to crucifixion. Others depict him on trial in an American courtroom or as a rock star delivering the Sermon on the Mount.

“Art was really the medium to teach faith for a long time,” she said.

Michael’s manuscript was of people walking into church as Jesus descended from heaven. The idea that his work could be in a famous museum didn’t seem to faze the budding artist.

Principal Lisa Shipley said the experience of having art shown in a museum will linger with the students for years.

“I think it showcases not only Mount Carmel but the good work going on in Catholic schools,” Ms. Shipley said. “This sparks in children a belief they can create and try things and be successful.”