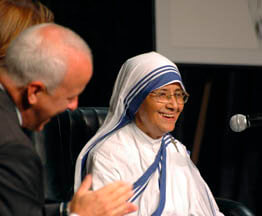 LATROBE, Pa. – Blessed Mother Teresa, founder of the Missionaries of Charity, did not curse the darkness that plagued her, but rather she embraced it, Sister Nirmala Joshi said Oct. 6 at St. Vincent College in Latrobe.

“She chose to accept the darkness that the world chose for her,” said Sister Nirmala, Mother Teresa’s successor as superior general of the order of nuns.

She spoke during an Oct. 5-7 conference at the college titled “Remembrances of Mother Teresa of Calcutta by Her Family and Friends.”

It was a three-day reunion of people who knew and loved her. The event commemorated the 10th anniversary of her death or, as Benedictine Archabbot Douglas R. Nowicki, college chancellor, said, “her entrance into heaven.” She died in Calcutta, India, Sept. 5, 1997.

In the discussion moderated by author and television host Colleen Carroll Campbell, Sister Nirmala and Father Brian Kolodiejchuk, a Missionaries of Charity priest who is the postulator of her sainthood cause, brought to light the meaning of Mother Teresa’s surprising and well-publicized interior “darkness.”

The discussion was broadcast by the Eternal Word Television Network.

“Mother Teresa: Come Be My Light,” the book that Father Kolodiejchuk edited, made headlines even before it was released and was the focus of a recent Time magazine cover story.

“We are now in a position to know about Mother Teresa’s interior life and what she lived through all those years,” he said.

Its publication raised questions in the secular world about Mother Teresa’s holiness, but those who understand the human struggles with faith are not that easily shaken by the pain that she wrote about. Instead, her struggles can be understood as a union with Christ in his suffering, Sister Nirmala and Father Kolodiejchuk both noted.

“She spoke of faith and love, and she spoke of an unbroken union,” he said.

The book reports on, and quotes from, letters between Mother Teresa and her confessors and superiors over a period of 66 years. It covers Mother Teresa’s early years as a nun and the revelation that she felt the presence of Jesus and heard his call to devote her life to the poor.

Her encounter with Christ was the reason that she founded the Missionaries of Charity, and she was on fire with what they could do in the name of God. Loving the unloved became her passion, and others followed her, first the sisters, then the priests.

Then for her there came silence from Jesus.

“She couldn’t understand this,” Father Kolodiejchuk said. “She had surrendered and accepted, and she experienced this terrible sense of loss and loneliness. Then the darkness set in.”

It lasted for decades. But none of it deterred her from keeping her promise to Jesus. His thirst from the cross became her thirst, he said.

Sister Nirmala saw Mother Teresa as a humble person “who knew who God was” and who was aware of her own limitations.

“‘I am nothing special,’ she would say,” Sister Nirmala said. “In her ‘nothingness,’ she showed his glory. She wanted to remain hidden, but the Lord shined on her and made her known. Thanks to her spiritual director who kept her letters, we now know about the inner workings (of Mother Teresa) and the workings of God.”

Father Kolodiejchuk defended the decision to publish her letters. Some have criticized the book as an invasion of privacy that went against her wish to have her letters destroyed upon her death.

“The life of a saint is personal, but it is not private,” he said.

Their struggles also can serve as examples of how difficult it is for even saints to achieve holiness, he added.

When Campbell asked if these are “lessons for those who are not in the mystical union” of such great depths, Father Kolodiejchuk replied that such was “part of the growing in faith.”

There have been questions, too, about whether Mother Teresa was suffering from depression. But, according to Father Kolodiejchuk, who is also a psychiatrist, she did not seem to have symptoms of clinical depression.

“There was a cheerfulness aside from her prayers, not withdrawal,” the priest said.

If some of her letters were dark, her life was not. Jesus was the foundation of everything she did, and the other less sensational parts of her memoirs show that.

So did the way she lived, he said.

“Mother traveled the whole world with the love of Jesus in her heart and the name of Jesus on her lips,” Sister Nirmala said. “She traveled lightly in simplicity and in joy. She had kind words and blessings for everyone.”

Father Robert Conroy, superior general of the Missionaries of Charity Fathers, said the challenge was “to know her as she was and not what we made her.”

“She was our mother, someone we knew that we could approach,” he said in his homily at the opening Mass Oct. 5. “We knew who she was and where she came from. We knew her mannerisms and her way of speech. Then the publication of the book opened up a whole new dimension of the person we thought we knew.”

The darkness she spoke of, he noted, is like the one found in the Gospel accounts of the Crucifixion, when the whole land turned dark.

“Mother Teresa is our inspiration,” Father Conroy said. “She is ours. She is a saint of modern times. What she would want for us is that we draw closer to the one she loves eternally.”