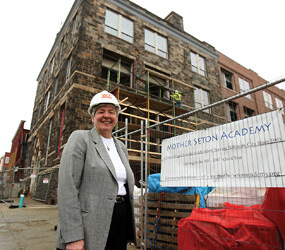 Every morning on her way to Mother Seton Academy in Fells Point, School Sister of Notre Dame Charmaine Krohe drives by the old St. Ann School in Baltimore.

Since being closed as a parish school in the 1970s, St. Ann has hosted an adult learning center and a men’s shelter. Construction crews, however, are hurrying to bring Catholic education back to the intersection of Greenmount Ave. and E. 22nd St.

As president of Mother Seton Academy, Sister Charmaine sees a vision coming to fruition. She hopes that her middle school can move into a structure with more than 30,000-square-feet by July and be open for students August 24, the first day of class in the 2009-10 school year.

At least once a week, she checks on construction.

“That’s new,” Sister Charmaine said with a smile March 26, looking at recently-installed flooring in the gymnasium and cafeteria.

Throughout the building, a prayer room, media center, science and art labs and music rooms are taking shape.

Mother Seton’s arrival could serve as a catalyst for revitalization in the neighborhoods around North and Greenmount Avenues.

“Just to have a middle school back in the neighborhood is big,” said School Sister of Notre Dame Jeanne Barasha, St. Ann’s pastoral administrator.

Mother Seton, an all-scholarship institution, has a history of using closed Catholic schools. Originally housed at the old St. Patrick School on Broadway Street in 1993, it moved into the former St. Stanislaus convent in 1994.

“It no longer remained financially feasible for us,” Sister Charmaine said of staying at the current site.

During Mother Seton’s founding days, the six sponsoring religious orders: School Sisters of Notre Dame; Sisters, Servants of the Immaculate Heart of Mary; the Sisters of St. Francis of Philadelphia; the Daughters of Charity; the Marianist Province of the United States; and the Xaverian Brothers- met at St. Ann to plan the school.

“We look at it as the providence of God that we come back to where the vision was first conceived,” Sister Charmaine said.

Mother Seton is one of 65 schools around the country that operate under the Nativity School model, Sister Charmaine said. Students attend school from 7:30 a.m. to 5 p.m. Many go on to attend Catholic high schools in the Archdiocese of Baltimore.

Mother Seton currently has an enrollment of 52, and its new building will have a capacity for 90 students.

“We couldn’t handle anything too big,” Sister Charmaine said. “The Nativity model is small in class sizes. That’s what makes it unique. A very unique part of Mother Seton Academy is that it is a very close, family kind of school. We wanted to retain that.”

The majority of Mother Seton students, according to Sister Charmaine, are black or Hispanic. She said many are poor and disadvantaged and take two busses to get to Fells Point. If students can’t walk to the new location at St. Ann, travel should be limited to one bus, as most live in the neighborhood.

Students were to bury a time capsule in the walls of the new school during a hardhat tour planned for March 31.

“I’m very happy about the school being reused,” said Sharon Johnson Stewart, a member of the St. Ann class of 1964. “That school holds a lot of memories for me. It’s a good opportunity for children to get a Catholic education, and that’s important to me.”