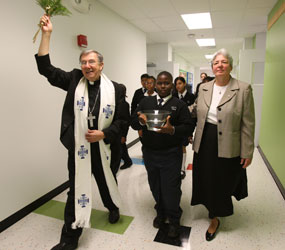 The spirit of cooperation at the newest school location in the Archdiocese of Baltimore was noted by Auxiliary Bishop Denis J. Madden.

“When we all work together, then Christ is present and there’s no end to the good that can come,” Bishop Madden said, adding the motto of the Xaverian Brothers, “In harmony small things grow.”

Bishop Madden celebrated the Oct. 24 dedication and blessing of the new Mother Seton Academy, a renovated three-story building that once housed a parish school at St. Ann in Baltimore.

Among the event’s rich ironies, it was held on Foundation Day of the School Sisters of Notre Dame, who taught in the old St. Ann school, which had closed in 1972.

Another neat link came in the recollection that once the School Sisters, the Xaverians and four other religious orders committed themselves to creating a middle school for at-risk children, their very first planning meeting, in 1991, was in the convent of the same St. Ann Parish.

“The school began began with two classrooms, four nuns and one volunteer,” said Xaverian Brother Arthur R. Caliman, chairman of that initial planning committee. “This is beyond our imagination.”

Mother Seton Academy numbers 66 students this year, with plans to cap enrollment at 90.

From 1994 to June 2009, Mother Seton Academy made its home in Fells Point, in what was once the St. Stanislaus convent.

A $7 million project at St. Ann sparkles with modern touches, like SMART Boards and the computer lab that abuts the media room, but there’s also a nod to the traditional. Some walls have exposed brick, and every student seems infused with the rigor and standards that are a trademark of Mother Seton Academy.

“The paint is brighter, the rooms are bigger and resources are great,” said Ricardo Johnson, a member of the Class of 1999 who now sits on the school’s board of directors. “The mission is unchanged.”

Mother Seton Academy is the only co-ed school in the archdiocese based on the Nativity Model. It targets children who cannot afford any tuition and are eligible for the federal meal program. Students must have potential to advance to college prep high schools.

James Scott, the plant manager, is also the father of Malinda, a sixth-grader at Mother Seton Academy, and James, a graduate who’s now at Loyola Blakefield.

“My wife, Anna, and I didn’t want our son to run wild,” Scott said. “We were impressed by what Mother Seton Academy stood for. They had a faith in God, and their program. They had a good curriculum, good discipline.”

In addition to the School Sisters of Notre Dame and the Xaverian Brothers, funding, inspiration and instruction are supplied by the Society of Mary (Marianists); the Sisters of St. Francis of Philadelphia; Sisters, Servants of the Immaculate Heart of Mary; and the Daughters of Charity.

The welcome given by St. Ann Parish is also appreciated. The project appears to be reaping residual benefits, as developers refurbish abandoned rowhomes on 21st and 22nd Streets.

“There’s an African proverb, ‘Before you speak, announce on whose shoulders you stand,’ ” said School Sister Charmaine Krohe, the school’s president, thanking all who made the project possible.

Laura Minakowski, principal, was overwhelmed with emotion. Mayor Sheila Dixon was among the standing room only crowd in the multi purpose room that roared its approval.

“We are very proud to have made a concerted, deliberate decision to have this school in the city,” Sister Charmaine said. “We could have gone to other places, but we wanted to make a statement, that a fine institution can exist, does exist in the city.”