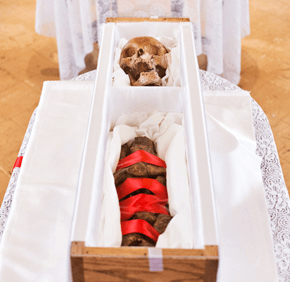 By Maria Wiering
mwiering@CatholicReview.org
Twitter: @ReviewWiering
ARBUTUS – “You can’t explain it,” said Oblate Sister of Providence Celestina Johnson, 86, searching for words to describe her feelings. She had just participated in a June 3 canonical celebration where the remains of her congregation’s foundress were transferred to a permanent home in its mother house’s chapel.
“You never thought a day you’d live to see this,” said Sister Celestina, an Oblate for 56 years. “To look upon the remains of her is astounding.”
The transfer of Mother Mary Lange’s remains from New Cathedral Cemetery in Baltimore to Our Lady of Mount Providence Convent Chapel was prompted by her cause for canonization as a saint in the Catholic Church. Archbishop William E. Lori petitioned the Congregation for the Causes of the Saints in April for her remains to be transferred, and the Congregation assented to his request May 3.
It is a tradition for the Catholic Church to make the relics of a person with a cause for canonization more accessible to the public for increased devotion and pilgrimage.
With approval from Rome, Cardinal William H. Keeler, then archbishop of Baltimore, officially opened a formal investigation of Mother Lange’s life in 1991. In 2004, documents describing Mother Lange’s life were sent to the Vatican’s Congregation for the Doctrine for the Causes of Saints, and the Congregation approved the cause for her sainthood.
Mother Lange, along with Sulpician Father Nicholas Joubert, established the Oblate Sisters of Providence in Baltimore in 1829. A refugee from Santiago, Cuba, possibly of Haitian heritage, Mother Lange started the nation’s first Catholic school for African American refugee children a year before founding the Oblates, the first religious order for African American women.
Oblate Sisters are now present in Maryland, New York, Florida and Costa Rica, and have attracted sisters from at least 13 different countries.
Mother Lange began her work 35 years before the Emancipation Proclamation, while Maryland was a slave-holding state. She died in 1882.
The girls’ school she established in 1828 became St. Frances Academy, now a co-educational college preparatory school in East Baltimore. It is the oldest continuously operating black Catholic school in the United States, according to the Oblates.
Archbishop Lori presided over the two-hour canonical celebration encompassing the transfer and blessing of Mother Lange’s remains, which included her skull and several bones exhumed May 28. The faithful venerated the relics before they were sealed in a reliquary and sarcophagus in the chapel’s oratory. The sarcophagus cannot be reopened without Vatican permission.
In a homily, Archbishop Lori said Mother Lange’s bones inspired hope in Jesus Christ, resurrection of the body, eternal life, and Mother Lange’s presence in the Communion of Saints.
“Throughout her lifetime, a wonderful legacy of love, service, education, reaching out to the sick, serving the poor, bearing witness to human dignity was compiled,” he said.
Also present at the celebration were Bishop John H. Ricard, bishop emeritus of Pensacola-Tallahassee, and Xaverian Brother Reginald Cruz, vice postulator for Mother Lange’s cause for sainthood.
Mother Lange “overcame some very incredible odds and succeeded with the grace of God and persistence, hard work, determination, faith and love,” said Bishop Ricard, a member of the Josephite Fathers and former auxiliary bishop of Baltimore.
He has worked with the Oblate Sisters since he was ordained a priest and appreciates their contributions to the church, he said.
As part of the cause for Mother Lange’s canonization, Brother Cruz is writing a “positio,” a paper documenting Mother Lange’s life, under the direction of cause’s postulator in Rome, Dr. Waldery Hilgeman, who oversees the cause. It is expected to be finished by the end of July.
If the Congregation for the Causes of the Saints approves the positio, Mother Lange, currently considered a “Servant of God,” would be given the title “Venerable.” A confirmed miracle attributed to her intercession would then be necessary for her beatification, and a second miracle would be necessary for her canonization.
The transfer of Mother Lange’s remains to the congregation’s motherhouse is “a tremendous blessing for us,” said Sister Mary Alexis Fisher, the Oblates’ superior general.
“Mother Lange’s spirit has lived on in our congregation throughout these many years,” she said. “We know Mother Lange is present with us, but it will be even more special to have her physical remains here at our motherhouse.”
Copyright (c) June 4, 2013 CatholicReview.org
PrevNext