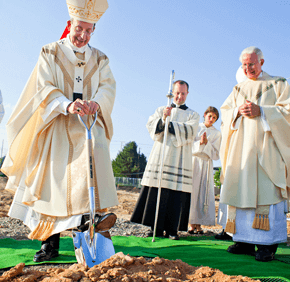 Following Mass at St. Louis
By Maria Wiering
mwiering@CatholicReview.org
Twitter: @ReviewWiering
CLARKSVILLE – Taking a shovel, Archbishop William E. Lori looked at the crowd gathered June 1 near an open lot between St. Louis Church and its pre-kindergarten-to-eighth-grade school.
“OK, here we go,” he said with a smile. “Let’s pray this project gets done on time and under budget.”
The crowd laughed and murmured agreement as he dug into the dirt for the ceremonial groundbreaking and blessing of St. Louis’ new parish activity center. Auxiliary Bishop Mitchell T. Rozanski and Monsignor Joseph L. Luca, St. Louis’ pastor, also turned the soil before joining parishioners at a reception celebrating the milestone.
The $6 million activities center is the final piece of a building campaign St. Louis launched more than 15 years ago. It began with a new church and included a pastoral center and new rectory. The 1980 church building was remodeled into a social hall and meeting space.
Interested in purchasing a photo from this slide show? Click here.
“We had to transform the entire campus from a sleepy little ville to a rather large outer-urban area of 4,500 families,” said Monsignor Luca, who has been St. Louis’ pastor since 1996. “It’s a great relief to know that after all these years of planning and work that we’re rounding the bend and heading to the final phase.”
The 23,000-square-foot activities center will adjoin the 1961 school building, serving as its main entrance. The center will include a new gymnasium with a theater stage and offices for the parish’s youth ministry and religious education programs and school administration. Part of the existing school building will also undergo renovation.
The project is slated for completion in late summer 2014.
“It’s a great accomplishment,” said Pat Marlatt, a parish corporator and building committee chairman.
The parish’s facilities are in use from 6:30 a.m. to 11 p.m. almost every day, he said, and the current gym is among the busiest spaces.
Principal Terry Weiss describes the current activities space as a “gymacafitorium” – a single room that triples as a gymnasium, cafeteria and auditorium. It is too small for large school events, and the tile flooring isn’t conducive to sports, she said.
“We use it for everything, and the new facility will be wonderful, because we can have multiple classes going on at the same time since it’s so big,” she said. “It opens up all sorts of possibilities.”
The space will also facilitate large youth events and parish speakers, said Pat Sprankle, St. Louis’ director of youth ministry.
Prior to the groundbreaking, Archbishop Lori presided at the Saturday evening Mass anticipating the feast of Corpus Christi, which celebrates Christ’s real presence in the Eucharist.
Monsignor Luca found the timing fitting.
“We’re essentially a community that celebrates the Eucharist, and from that gift of the Eucharist flows all of our service and evangelization projects,” he said.
St. Louis tied the activities center fundraising to the Archdiocese of Baltimore’s current capital campaign and is expecting to raise more than $9 million. Part of those funds are slated for the repair of its 1889 church’s bell tower, estimated to cost $300,000.
Glenn Falcao, capital campaign chairman, said he was apprehensive about setting such an ambitious goal during an economic downturn, but the response has been positive. Almost $5 million has already been raised.
“It has been extremely successful,” he said. “If you have a good project, and people believe in it, they just rally around.”
Also see:
St. John’s Catholic Prep grad received values-based education
Official clergy assignments for June 2013
Copyright (c) June 3, 2013 CatholicReview.org
PrevNext