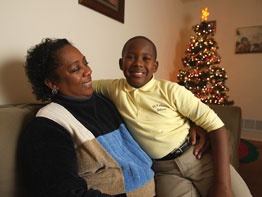 Malik Sterling Tillery Brogden slumped in front of a sofa Dec. 17 in his family’s Baltimore home. His mother, Margaret Brogden, sat just above him and placed her hand gently on his head, eliciting a smile from the 8-year-old boy.

“That means she loves me,” Malik, dressed in his St. Katharine School uniform, proclaimed.

Some days Ms. Brogden’s non-verbal display is enough. Other days, she announces her devotion to the world.

“That was the moment I gave birth,” the Archdiocese of Baltimore’s coordinator of youth ministry said.

A large contingent of supporters took up half the room. There were family members, youth ministers and members of their parish, Transfiguration Catholic Community.

“The love and joy in the courtroom was palpable,” said Cassandra Anderson, youth minister for Severna Park’s St. John the Evangelist. “Every single person was grinning, cheering, clapping and crying.”

It was a moment when the new mother and son realized they weren’t beginning the next phase of their journey alone.

Malik confessed he wanted to cry. He couldn’t explain emotions.

Safety was not always assured for Malik.

When he was 4 months old, his birth mother went to his father, Sterling Tillery, and said she no longer wanted the baby. During the next four years, Mr. Tillery raised Malik with another woman.

She didn’t meet Malik until he was 4-years-old, two days before Mr. Tillery’s 2004 funeral. He died of a drug overdose.

Malik was not an average 4-year-old. He was energetic and worldly. He had seen things many adults never witness.

“When my cousin died,” Ms. Brogden said, “I remember praying to God ‘If you want me to take this child, I’ll take him.’ God came to me. I held it in my heart for a long time, and I waited for God to decide what was going to happen.”

Mr. Tillery’s girlfriend couldn’t maintain a stable home. Ms. Brogden watched from a distance and had Malik over for weekends and holidays.

When Ms. Brogden arrived at the woman’s apartment, there was evidence of drug use.

“She knew we called child protection on her and she actually disappeared with him,” Ms. Brogden said. “For three or four months, I kept calling child protection saying, ‘Have you heard anything? Have you looked here?’ We were following up on leads.”

Ms. Brogden drove around Baltimore City in hopes of stumbling upon Malik. The former sister of the Mission Helpers of the Sacred Heart never imagined she would be a mother. The desperate search for her future son was fruitless.

Hope emerged when a friend of Mr. Tillery’s girlfriend called social services. The friend claimed there was substance abuse and other troubling adult behavior in the Baltimore house. Malik was there.

Social Services called Ms. Brogden with the news. When she arrived at their offices, she fixed her eyes on her little cousin as he sat in a room. Tears well up when she thinks about how emaciated he looked. A muscle shirt hung off his body lifelessly. He smelled, she said, and was confused.

“Malik,” she asked, “would you like to come home with me?”

Ms. Brogden saved Malik’s clothes from previous visits. When she went to give him a bath, he was not wearing underpants. He had nothing.

She said Malik later relayed stories of sporadic physical abuse by the woman he always believed was his mother.

“She pushed him against a wall, she hit him, she beat him,” Ms. Brogden remembers him telling her. “He’s seen a lot. I’ve had him in therapy ever since, and it’s been absolutely wonderful.”

Ms. Brogden enrolled him in St. Katharine to surround him with positive values. He quickly became a straight-A student. She noticed he had a good memory – perhaps too good.

Emotional breakthroughs have come. During a school discussion about the dangers of drugs, Ms. Brogden said, Malik raised his hand and sobbed.

“My mommy didn’t want me because of drugs,” he told his teacher.

The teacher put her arm around him and, “Baby, I don’t know what that’s like but you have a mommy who loves you now.”

Then, his St. Katharine class prayed with him and for him.

It wasn’t until the Dec. 3 adoption ceremony that Malik stopped calling Ms. Brogden “Margaret” and referred to her as “Mommy.”

She prays to the Blessed Virgin Mary to become a better mother.
“I think he’s still grieving his father’s death and grieving the loss of the woman that was his mother,” she said. “Our relationship has grown over these last two years. It took us a little while to get there. I can’t imagine my life without him”

She signed Malik up for a Big Brother program so he could have a male influence. Demitri McDaniel, the big brother, takes him on trips and offers advice.

Malik, he said, is well-groomed and mannered. He marvels at Ms. Brogden’s selfless decision to adopt him.

“It really takes a special person to do that,” he said.

A week before Christmas, Malik and his new mother relished their bond. Although he had been with her for two years, they both knew this was special. She wanted him to remember it forever.

“She,” Malik said looking at her with a knowing smile, “spoils me!”