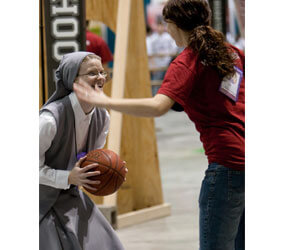 Two years ago, Emily Moesner didn’t know what to expect as she headed to Kansas City, Mo. For the National Catholic Youth Conference. By the end of the first night there, she was transformed.

“It was amazing how many people were there,” Moesner said. “People were going crazy for Jesus. I definitely changed my attitude and the way I worship. It made me pray differently and I try to incorporate that into my life.”

Moesner shared her enthusiasm with nearly 300 people at Monsignor Slade School in Glen Burnie Oct. 30. The Archdiocese of Baltimore delegation of both NCYC veterans and rookies gathered as they prepared to head to the national event of praise and worship in Indianapolis Nov. 17-19.

During the event, bishops from around the country will gather with young people for a closing Mass at Lucas Oil Stadium, home of the NFL’s Indianapolis Colts.

The event will include a sports-themed “park,” an interactive venue with games, music, art, exhibits, religious orders and vendors. Young people can even get a baseball card autographed by a bishop. The popular game cornhole will be available in the park, with priests, nuns and other religious taking on youths.

Nuns have been known to shot some hoops with young people at NCYC as well.

Jameson Snead, a parishioner of Our Lady of the Chesapeake in Lake Shore, attended the Baltimore Youth Catholic Conference in Ocean City in 2010. While BYCC has between 500 and 800 attendees every two years, NCYC attracts about 20,000 in the years between.

“I’m involved in the music ministry back home,” Snead said, “so I’m really excited to get to know more Catholic music, dance and be part of a whole stadium of people who feel the same way I do. This is a massive scale”

Father Wible, pastor of St. Francis de Sales in Abingdon, has been a regular attendee of NCYC.

“One of the reasons I go as a priest is that it’s one of the most concrete ways I can show my support for the young church,” he said. “I firmly believe it’s important to be involved in youth ministry in the parish. It’s not just the kids that we’re taking. The whole parish knows I’m taking a weekend off to go and be with our young people.”

Priests hear confessions from thousands of teens at NCYC, and it’s particularly invigorating for Father Wible.

“It’s an incredible experience of God’s presence in my life as well as the life of the young people who are approaching the sacrament, sometimes for the first time in a long while,” he said.

A former youth minister, Father Wible said attendees “get to see that broader church and see it’s OK to be religious and Catholic and that’s a pretty cool thing.”