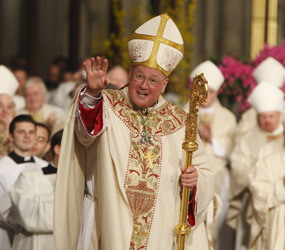 NEW YORK – St. Patrick’s Cathedral in New York overflowed with people, music, incense and good will for the April 15 installation of Archbishop Timothy M. Dolan as the 10th archbishop of New York.

More than 2,000 guests in the cathedral listened to two church choirs and a brass ensemble and watched on television monitors as Archbishop Dolan, waiting outside on 50th Street, waved, pointed, grinned and called out to many of the 1,000 robed clergy and laity who moved into place ahead of him in the 45-minute opening procession.

His entrance through the main doors of the cathedral on Fifth Avenue was greeted with echoing applause.

The Mass of installation was attended by 12 cardinals and more than 115 archbishops and bishops. Some 800 priests in white chasubles participated from a sea of folding chairs arrayed on three sides of the high altar.

In his last act as administrator of the archdiocese, Cardinal Edward M. Egan, newly retired archbishop of New York, recalled the visit of Pope Benedict XVI to St. Patrick’s one year ago, with many of the same people in attendance. The apostolic nuncio, Archbishop Pietro Sambi, said the day was “a new start with a new shepherd.”

The Gospel, read by a deacon, was Luke’s description of Jesus meeting the disciples on the road to Emmaus.

In his homily, Archbishop Dolan said contemporary Christians should turn to Jesus and “recognize him again in his word, in the ‘breaking of the bread’ and in his church. Let him ‘turn us around’ as he did those two disciples, turned them around because, simply put, they were going the wrong way.”

He said no one really knows where the village of Emmaus was, so Christians hoping to retrace Jesus’ steps can do so by making every journey in life a “walk down the road to Emmaus.”

Archbishop Dolan invited his “new friends in this great archdiocese” to join their new pastor on an “adventure in fidelity” along familiar New York thoroughfares to “witness a real ‘miracle on 34th Street’ and turn that into the road to Emmaus.”

The homily was greeted with enthusiastic applause eight times, including two standing ovations. The longest ovation was in response to his observation, “The Resurrection goes on, as his church continues to embrace and protect the dignity of every human person, the sanctity of human life, from the tiny baby in the womb to the last moment of natural passing into eternal life.”

He said the church is a “loving mother who has a zest for life and serves life everywhere, but can become a protective ‘mamma bear’ when the life of her innocent, helpless cubs is threatened.”

Archbishop Dolan called the priests of the New York Archdiocese “the apple of my eye” and said they “mean everything to me. Without you, I can’t do anything.”

“I have long admired you from afar, but today for the first time I can say ‘my brother priests’ of the Archdiocese of New York – my admiration, my deep appreciation, my unflagging love for you. Thank you, brother priests.”

At a press conference earlier in the day, Archbishop Dolan said, “I need to be to my priests what I want them to be to their people.” He said it is important to dispel the caricature of religious life as a “very dour, sacrificial life” and reveal it as “one of the most freeing, liberating, joyful styles of life you can lead.”

The installation Mass reflected the ethnic diversity of the 2.5 million Catholics in the 10 counties making up what Archbishop Dolan called “these extraordinary acres of the Lord’s vineyard of the church we call the Archdiocese of New York.”

The epistle was read in Spanish, Archbishop Dolan pledged himself to Spanish-speakers in their language during his homily, and the prayer of the faithful was offered in seven languages, ranging from Irish Gaelic to Igbo, spoken in Nigeria.

In his homily, Archbishop Dolan cited the welcome given by the archdiocese to generations of immigrants, “who came and still come to this country through this city with little or nothing of earthly value, but tenaciously clung to that ‘pearl of great price,’ their faith, to find in the church here the spiritual counterpart of Lady Liberty, holy mother church, who welcomed them, embraced them, settled them in, taught their children, and kept that faith alive.”

Archbishop Dolan drew laughter and applause when he said he was glad his mother was there. “I was concerned this morning when she found out there was a sale at Macy’s,” he said. He also quipped, “Maybe I should not be so flattered that so many are here today. … After all, everybody wants to claim sanctuary on income tax day!”

Musicians at the Mass included tenor Ronan Tynan, who sang Franz Schubert’s “Ave Maria” and Cesar Franck’s “Panis Angelicus.” His loosely knotted green necktie was a nod to the Irish heritage he shares with the archbishop.

Two hours after he entered the cathedral, Archbishop Dolan made the rounds of the sanctuary before the concelebrants recessed and then made his way down the aisle to applause, “working the crowd” like a seasoned New York leader.