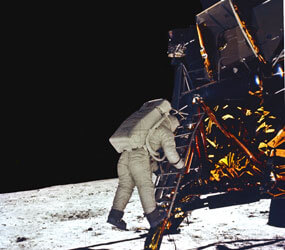 VATICAN CITY – “Honor, greetings and blessings to you, conquerors of the moon, pale lamp of our nights and our dreams,” Pope Paul VI said in a message to the three Apollo 11 astronauts who had just landed on the moon.

The night of July 20-21, 1969, Pope Paul had spent time looking at the moon through the telescope of the Vatican Observatory at his summer residence in Castel Gandolfo. Then he watched the actual landing and the first moon walk on television.

But his message to the U.S. astronauts and a congratulatory telegram to then-President Richard Nixon represent only a tiny portion of what Pope Paul had to say about the expedition months before the July 16 launch and months after the July 24 return to earth.

Marking the 40th anniversary of the first manned mission to land on the moon, Vatican Radio published its collection of Pope Paul’s audience and Angelus talks about the mission, his reflections on the day of the landing, and the text of his speech to astronauts Neil Armstrong, Michael Collins and Edwin “Buzz” Aldrin, whom he met at the Vatican Oct. 16, 1969.

Pope Paul told Armstrong that he was right on the mark in describing the mission as “one giant leap for mankind.”

“Man has a natural urge to explore the unknown, to know the unknown; yet man has also a fear of the unknown,” Pope Paul told the three men. “Your bravery has transcended this fear and through your intrepid adventure man has taken another step toward knowing more of the universe.”

Pope Paul told the men that the time, energy, talents, resources and teamwork behind their successful trip “pay tribute to the capacity of modern man to reach beyond himself, to reach beyond human nature, to attain the perfection of achievement made possible by his God-given talent.”

The pope also prayed that people’s knowledge of God’s creation would continue to grow and that it would lead them to see more clearly God’s power, infinity and perfection.

Pope Paul began talking about the Apollo 11 mission at his weekly general audience May 21, 1969.

In his audience and Angelus addresses over the next two months he repeatedly emphasized that the Catholic Church applauded the accomplishments of science, technology and human ingenuity, but he always drew people’s attention back to God as the source of their creativity and the creator of the universe they were trying to explore.

Speaking July 13, he said that, just as the mission drew people’s attention to the moon, it also should provoke questions about human life and identity.

A week later, just hours before the moon landing, he cautioned that, while technology could allow humanity to reach great heights, its use for good or evil always depended on human minds and hearts.

“The human heart absolutely must become freer, better and more religious as machines, weapons and the instruments people have at their disposition become more powerful,” he said.

“Today we celebrate a sublime victory,” he said, but human beings also must dedicate their time, talent and creativity to solving problems on the planet that is their home.

“As we know, there are still three wars under way on the face of the earth: Vietnam, Africa and the Middle East and a fourth has been added, already claiming thousands of victims in El Salvador and Honduras,” he said in the July 20, 1969, speech.

Adding that “hunger still afflicts entire populations,” he asked, “Where is real humanity? Where is brotherhood? Where is peace?”