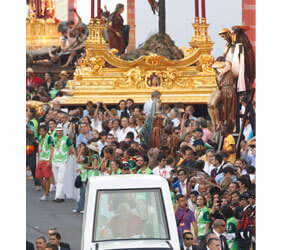 The vividly painted, graphic statues that illustrated each station of Jesus’ passion and death were accompanied by meditations focused on individuals, groups and nations enduring serious suffering today.

Many young people – even those blocks away, watching on Jumbotrons – read along in special prayer books included in pilgrim backpacks.

Ryan Titzer, a 17-year-old parishioner of St. Timothy Parish in Chantilly, Va., described the “pasos” as “3-D Stations of the Cross.”

“They show such reality in the way they depicted the scenes,” he said. “I had to get a picture of every single one to show my parents, just because they were incredible looking.”

“It’s different then seeing a painting or a picture of him,” he added. “You could see the pain on Jesus’ face, and it just made it more real.”

One of Titzer’s fellow pilgrims, Bayleigh Aschenbrenner, 16, said the only thought in her head was, “It’s unimaginable that he went through all that for us.”

“It’s very humbling,” she said, and it gave her a greater appreciation for Jesus’ passion. “Being a more visual person, it’s definitely clicked a whole lot more.”

Many of the young people sacrificed their time and comfort by arriving hours early and standing in the hot sun to stake out a place near the papal platform in Plaza de Cibeles or in front of one of the station-statues set up along a main street leading to the plaza.

The meditations included prayers for the defense of human life, for peace in the Holy Land and other areas where there is conflict, for the victims of natural disasters, for the unemployed, for those who suffer racial discrimination or religious persecution, for those with alcohol or drug addictions, and for the victims of sexual abuse.

A cross was carried from one station-statue to another by young people from countries or situations where there is suffering. They included Iraqis, immigrants, recovering drug addicts, unemployed and people from Rwanda and Burundi.

A local woman, tissue in hand, leaned out of her shutter-flanked balcony to watch the progress of the cross.

The “paso” depicting the ninth station, Jesus Is Stripped of His Garments, included a prayer for victims of sexual abuse.

A few days earlier, Jenny McGuire, 18, of the Irish Diocese of Ferns, said years of revelations of clerical abuse of children had caused most Irish Catholics to lose faith in the institution of the church rather than their faith in God.

Seamus Sutton of County Wexford, Ireland, agreed, adding that World Youth Day, including the Way of the Cross, was a healing opportunity for pilgrims.

“I see this as a reconciliation with the church and with how these people are serving God and what I’m following,” he said.

Lauren O’Reilley, also from County Wexford, said that the abuse allegations have been especially hard on the Irish priests “that are so good.”

“People in Ireland are losing their faith, especially young people,” she said. “It’s nice to see all of us coming together to see that people still have faith.”

In his remarks at the end of the service, Pope Benedict acknowledged that everyone knows suffering, but he urged the young people to focus on Christ’s suffering out of love for all humanity and to imitate that love by committing themselves to alleviate the suffering of others.

Pope Benedict said meditating on Christ’s passion and death should lead Christians to ask, “What can we do for him?”

“Christ’s passion urges us to take upon our own shoulders the sufferings of the world, in the certainty that God is not distant or far removed from man and his troubles,” because Christ became human himself, enduring suffering and death, the pope told the young people.

The pope prayed that Christ’s love would “increase your joy and encourage you to go in search of those less fortunate. You are open to the idea of sharing your lives with others, so be sure not to pass by on the other side” of the road “in the face of human suffering, for it is here that God expects you to give of your very best: your capacity for love and compassion.”

“The different forms of suffering that have unfolded before our eyes in the course of this Way of the Cross are the Lord’s ways of summoning us to spend our lives, following in his footsteps and becoming signs of his consolation and salvation,” the pope said.

The harsh wood of the cross, he said, is a sign of the self-giving love that will give eternal life to all who ask.

“The cross was not a sign of failure, but an expression of self-giving love,” the pope said. The cross “teaches us to love what God loves and in the way that he loves. This is the good news that gives hope to the world.”