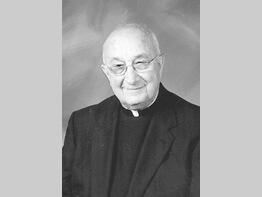 Monsignor Francis X. Zorbach, a popular longtime pastor of St. Philip Neri in Linthicum Heights who was highly regarded for his support of Catholic education, died Nov. 8. He was 81.

A Baltimore native who grew up in Highlandtown’s St. Elizabeth of Hungary parish, Monsignor Zorbach attended St. Charles High School and College in Catonsville before entering St. Mary’s Seminary on Paca Street and finishing his theological studies at The Catholic University of America in Washington, D.C.

He was ordained to the priesthood in 1952 and was first assigned as associate pastor of St. Arian in Inverness and St. Mildred in Gray Manor – parishes that later joined to become Our Lady of Hope in Dundalk.

“He was the best boss I ever had,” said Patricia Kenny, St. Philip Neri’s parish secretary of 25 years. “He was kind to everyone and he knew the name of every student in the school.”

Ms. Kenny remembered Monsignor Zorbach was very committed to the parish school. A multi-purpose parish center he helped spearhead is named in his honor and includes a gymnasium, auditorium and cafeteria combination. After his retirement, he made a very substantial gift through the Catholic Family Foundation to provide tuition assistance for children in the school.

“Each year, he would teach sign language to our kindergarten,” said Ms. Kenny, noting children would sign “Silent Night” at Christmas Mass. “I don’t think I’ll be able to hear that song again and not think of him doing that.”

When Monsignor Zorbach was at Catholic University he taught at Gallaudet University, a school for the deaf.

There was a lighter side to his stewardship at St. Philip Neri, where he introduced polka classes and dances. He also celebrated Masses at Polkamotion by the Ocean, an annual festival held on the Eastern Shore which attracts thousands of fans from across the country.

“He would find any widow in the room and get out there and polka,” Ms. Kenny remembered with a laugh.

“We called him King Neptune because he spent so much time in the water,” Bishop Rozanski said. “He loved the fraternity of his fellow priests and he deeply loved his family.”

Calling Monsignor Zorbach a “very warm and outgoing person who liked to draw people in,” Bishop Rozanski said his friend was dedicated to the priesthood.

“He was always ready for service,” Bishop Rozanski said. “He kept in contact with people throughout his priestly assignments.”

Monsignor Zorbach spent his retirement years at Sacred Heart of Mary in Graceland Park and Our Lady Queen of Peace in Middle River, remaining active at both locations.

“He was not a retirement type of priest,” Ms. Kenny said. “He needed people. He had to be with people.”