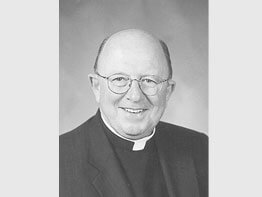 While young Dennis Tinder was in the fourth grade and his family lived in West Virginia, his father became a Catholic and befriended an Irish priest.

“I am convinced that was my initiation of thoughts about priesthood,” said Monsignor F. Dennis Tinder, who applied to the minor seminary four years later.

“Did I know what priesthood really meant as an eighth-grader?” Monsignor Tinder pondered. “No. But I thought it was a sense of something I wanted
to follow.”

And follow it he did. This year, the pastor of Immaculate Conception, Towson, celebrates 40 years as a priest.

“My decision was reinforced year after year as I changed and developed and my spiritual life matured,” said Monsignor Tinder, who entered St. Charles College Seminary with 125 young men and graduated six years later with 25 of them.

He spent six additional years studying in major seminary at Mount St. Mary’s Seminary and University in Emmitsburg, where he has served on the board of trustees since 1981, “one of the joys of my life,” he said.

At age 21, his decision to become a priest was sealed.

“This is what I’m going to do,” he told himself, and he kept the promise.

Three parishes and one vocation office job later, the 65-year-old “has no regrets,” he said. “I wouldn’t trade it.”

First assigned to St. Pius X, Rodgers Forge, the priest served there five years before moving on to the vocation office in the Catholic Center, where he developed and ran the mentor training program until 1981.

Monsignor Tinder became a pastor for the first time at St. Joseph, Fullerton, where he spent a decade.

“The first time you’re a pastor you leave a little bit of your heart there,” he said.

The next parish stop was St. Jane Frances de Chantal, Pasadena, described by the monsignor as “a different, wonderful community, much like a small town. You have to decide to go to Riviera Beach – it isn’t on the way to anywhere.”

During that tenure, he helped run the cardinal’s Heritage of Hope campaign.

When Pope John Paul II visited America in 1995, Monsignor Tinder was responsible for the airport portion, getting the pontiff in and out of town. He was named a monsignor in May 1996.

In 2000, Monsignor Tinder began serving as pastor of Immaculate Conception, where he attended school and his mother once taught.

The oldest of three siblings, the priest remembered “an enormous number of Catholic children in the neighborhood” where the family resided in Towson.

Monsignor Tinder celebrated the anniversary of his ordination with an afternoon Mass and May procession May 18 – a longtime tradition of Immaculate Conception – followed by a parish picnic in the hall.

In honor of his anniversary, the priest has encouraged his 3,000-family parish to consider endowments toward the two schools in his charge: Immaculate Conception School and Towson Catholic High School. Before he retires in about five years he said, “My hope is to provide a firm foundation for the future of both schools.”

In his career, Monsignor Tinder remembers the people the most, “those who have let me touch their life,” he said, “and those who have touched mine.”